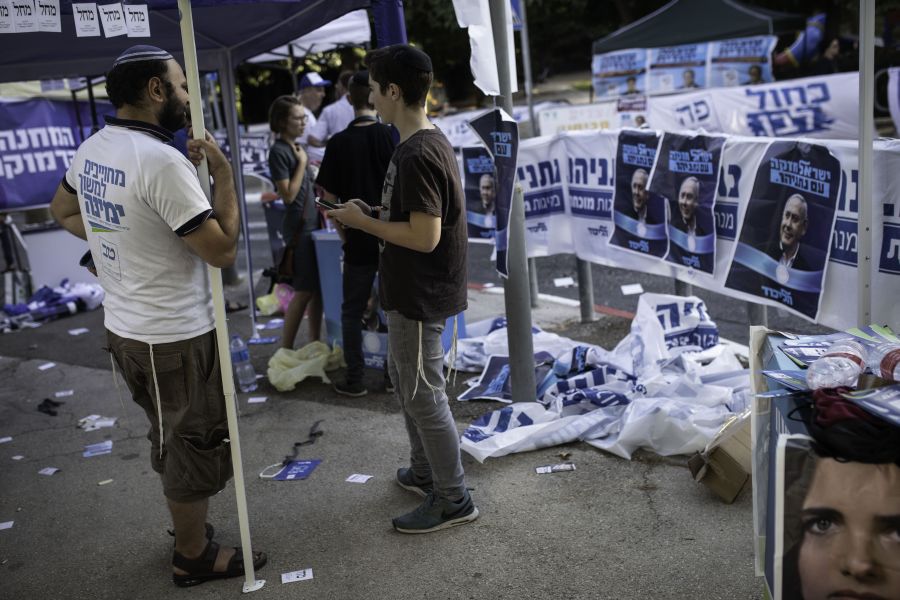 According to 91pc count of the votes in Israel’s general election on Sept. 17 Benny Gantz’s Kahol Lavon advances slightly to 26.3pc of the vote, a hair ahead of Binyamin Netanyahu’s 25.7pc. With fellow right-wing parties, Netanyanu garners 55 Knesset seats (out of 120) and Gantz 56 for a left-of center cabinet, creating a standoff. Neither can form a government without the other and so President Reuven Riviin, after consultations with party leaders, is expected to call on the two leading parties to form a national unity government. Negotiations are likely to lead to the premiership rotating between Netanyahu and Gantz. Final results not expected before Thursday when the soldiers ballots are in.

The Joint Arab List appears to have gained strength with 13-15 seats (instead of its current 11), while Yisrael Beitenu headed by Avigdor Lieberman (who spoiled Netanyahu’s attempt to form a government after the April election) has also profited (from 6 to 8-9).

Netanyahu appearing before his party activists early Wednesday said he would negotiate with fellow party leaders for the formation of a strong pro-Zionist government and prevent the rise of an anti-Zionist administration. He defined this as an government which relied for its majority on the Arab parliamentary faction, whose leaders, he said, refuse to recognize the state of Israel and who support its enemies. But according to partial results, Netanyahu stressed, a narrow right-wing government with a 61-member majority must be ruled out. The final results are still awaited later Wednesday.
Gantz responding to partial results pledged to strive for a unity government that represented the will of the majority. He did not repeat his campaign pledge of a “secular government.”. Netanyahu had not achieved his objective, said Gantz, but Kachol Lavan (Blue-White) had justified its fundamental idea in a big way and was here to stay.


Three sample polls from Israel’s national election on Tuesday deny incumbent Prime Minister/Defense Minister Binyamin Netanyahu and his Likud list a majority bloc of 61 Knesset members for leading another a right-wing government. Real results will not be known until Wednesday. The two largest parties Likud and Blue White are are too close to call.

Neither the right-wing bloc led by the prime minister nor the rival center-left Kachol Lavan (Blue-White) headed by Benny Gantz have enough support to form a majority government, without crossovers.

84 thoughts on “Kachol Lavan edges ahead of Likud in 91pc vote count. Neither holds majority”