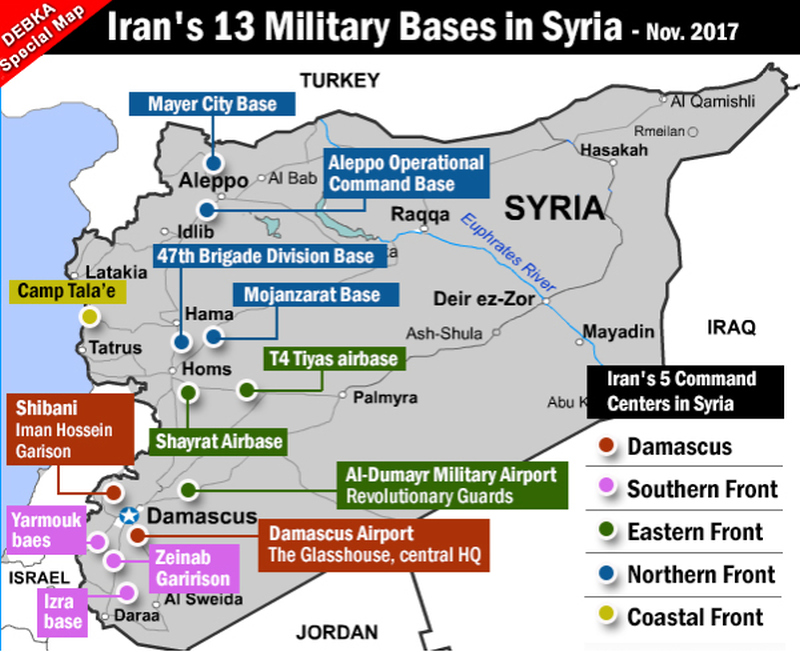 Strong pledges not to let Iran establish a military presence in Syria have come from US President Donald Trump, Saudi Crown Prince Muhammad bin Salman and Israel.. On Wednesday, Nov. 15, Israel’s Defense Minister Avigdor Lieberman again warned that Israel would not permit Iran to establish a military presence in Syria. he spoke after Prime Minister Binyamin Netanyahu had repeatedly stated that Israel reserved its freedom of military action in Syria to defend its borders.

The Saudi prince, who orchestrated Lebanese prime minister Saad Hariri’s flight to loosen Iran’s hold on Beirut, has summoned a conference of Syrian opposition leaders for Nov. 28, to create a powerful new bloc against Bashar Assad and his Iranian sponsors.

At a news conference on Tuesday, Nov. 14, US Defense Secretary James Mattis made no bones about Washington’s intent: “One key aim for Washington in Syria is to limit Iranian influence in Syria and Iraq, which expanded during the war with Islamic State,” he said.

But the US can expect no help in this from Moscow. Russian Foreign Minister Sergey Lavrov Tuesday strongly denied reports that Moscow was committed to ensuring the removal of Iran-backed militias from the country. He argued that their presence there was “legitimate.”

So what exactly are they all talking about? How broad and how deep is Iran’s grip on Syria? What are the facts? And why have they never been published until now?

DEBKA Weekly, following extensive research and investigation by its intelligence and military sources, is revealing for the first time here how Iran has disposed its military forces in Syria. In the face of all the warnings, the high commands of the Iranian army and Revolutionary Guards Corps (IRGC), were quietly building a formidable military machine in one corner of Syria after another. (See the attached map for details.)

It is organized into five regional military sectors – each with its own autonomous regional command, which is connected to the General Staff Headquarters Iran has established in Damascus.

The Northern Command is based in Aleppo; the Southern Command at Izra north of Daraa; the Eastern Command at the Al-Dumayr air field east of Damascus; and the Coastal Command at Camp Talae’ on the Mediterranean coast, between the ports of Latakia and Tartus.

These five commands govern 13 Iranian military bases which we can list as follows:

DEBKA Weekly’s sources have also counted around 75,000 military servicemen stationed in those bases, composed of the following groups (in estimated round numbers):

The presumption that a mere decision, even one taken jointly by the US and Russia, has the power to remove an army organized in this broad network of bases is no more than a pipe dream.