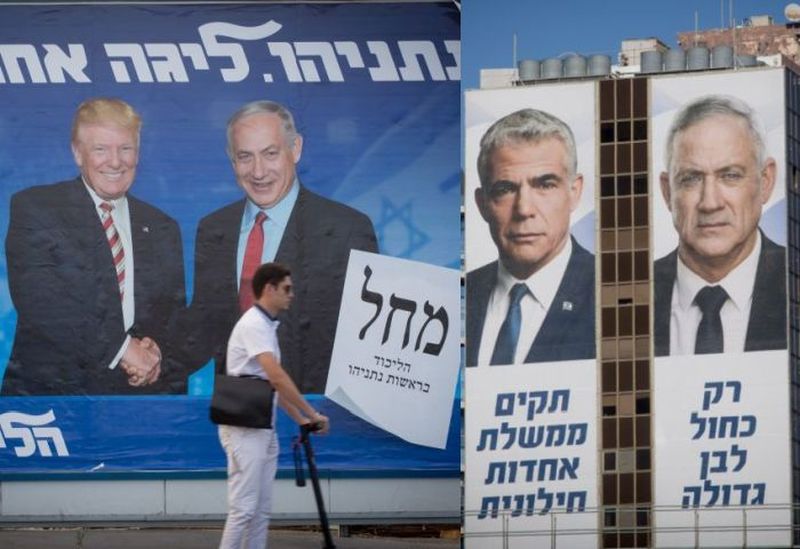 In the muddled political ambience of Israel’s second general election in a year, the opinion polls, however tendentious and mistaken, offer the only clues to its outcome. Most disconcertingly, their latest forecast almost mirrors the stalemate resulting from the April vote (a tie of 33-35 seats between Likud and Blue-White). It was the inability of Likud’s leader, incumbent Prime Minister Binyamin Netanyahu, to form a new government then which propelled the country into an unwanted vote on Sept. 17.

Up to 6.3 million eligible voters will be taxed on Monday with generating the three-seat swing either way that determines whether Netanyahu or Blue-White leader the former chief of staff Benny Gantz is Israel’s next prime minister.

Surprises can’t be ruled out in any free election.

Netanyahu could beat the vicious personal assault and the four outstanding corruption allegations against him (which many believe were drummed up so long as they are not proven in court) and leave all rival contenders standing.

Or, the newcomer, Blue white and its four-man leadership could unseat Likud, a feat no other party has managed to do in its 20 years in power. The Likud leader, however, is fighting for his life against a degree of “Netanya fatigue” after 10 consecutive years in power and a pervasive sense that this term may be his last.

In facing the voter, Bibi is not short of assets:

1. All the polls rate him as the most suitable candidate in the running for prime minister, preferred by a substantial majority.

2. No other Israeli politician has come close to his accomplishments as a skilled international diplomat, who has forged friendships with two world leaders, Donald Trump and Vladimir Putin, and opened doors to friendly ties with Arab rulers, especially in the Gulf.

3. Notwithstanding the outcry about his shortcomings as Mr. Security – especially against Hamas in Gaza – Netanyahu as prime minister – and latterly minister of defense as well – has kept Israel out of fighting major wars and so belied his hawkish image. In this sense, he resembles Trump by preferring non-military ways out of a crisis.

4. The ordinary Israeli’s standard of living is among the highest in the world. The average wage per capita rose this month to 12,000 shekels (equivalent to $3,428). Many Israeli families own their apartments and many also run two cars. An average 2.5 million Israelis (one-third of the population) take one or more overseas vacations per year.

5. The strongest opposition campaign message is that Netanyahu is unfit to lead the country while fighting four cases against him. Otherwise, none of the parties competing for power offers much else in the way of a political, security economic program for persuading the voter to change horses. A leading Blue-White figure, Yair Lapid, put this very simply in a Knesset speech this week: Netanyahu must go because “his time is up.”

6. The most powerful campaign against him and the Netanyahu family is not mounted by any political party but by the mainstream media. It is far more vicious than that of the political opposition. Reporting on national affairs has for years been heavily loaded to portray the actions of his government as shortcomings and failures, while harping daily on the gravity of the charges pending against him on the strength of select “leaks” from the police and the prosecution. His trial and conviction by the media go far to substantiate his claim of a witch hunt and contributes to his wide popularity as a victim rather than harming his campaign for re-election.

7. The opposition camp, which he labels a left-wing conspiracy against the national bloc that he leads, is split many ways. The four leaders of the biggest opposition party, Blue-White, are often at odds with one another. The veteran Labor party, which under David Ben Gurion founded the state of Israel, has been whittled down by defections to the far-left Meretz and desertions. Yemena, headed by former Justice Minister Ayelet Shaked, is unlikely to run to a double-digit figure, since its three national-religious component factions threaten to break apart after the election. And Yisrael Beteinu, headed by former defense minister Avigdor Lieberman, is losing the traction it initially gained when he destroyed Netanyahu’s bid to build a cabinet after the April election. For all these reasons, the notion of a national unity government, based on a partnership between Netanyahu’s Likud and Benny Gantz’s faction of the Blue-White alliance, dominates political course in the run-up to voting. Therefore, one way or another, the election on Monday holds the prospect of deepening the fragmentation in the opposition camp and depositing Likud once more in the lead of government.