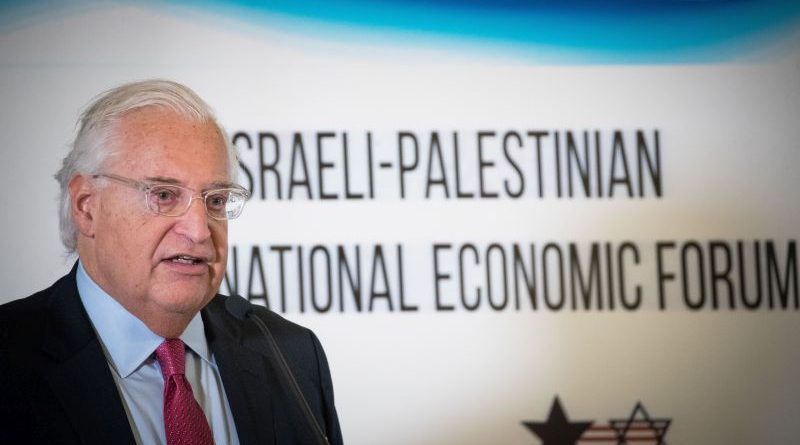 Dismemberment at many hands threatens the Middle East peace plan which President Donald Trump unveiled in February. US Ambassador David Friedman was summoned to the rescue. He called a second meeting on Sunday, June 14 with  Prime Minister Binyamin Netanyahu and Alternate PM Benny Gantz in an attempt to bridge their differences over Netanyahu’s plan to extend Israeli sovereignty to Jewish settlement regions in Judea and Samaria and the Jordan Valley.

Time is pressing, Netanyahu has vowed to release his plan from July 1. So far, no one admits to having the faintest idea of its content or scope. Kahol Lavan leaders are embarrassed by appearing to have no voice in this milestone act by a government in which they are equal partners – all the more so when Gantz agreed – albeit equivocally – to lend it his support when he and Netanyahu signed their coalition agreement.

Ganz and Foreign Minister Gaby Ashkenazi, who joined him in the meeting with Ambassador Friedman – who is strongly sympathetic to the Jewish settlement movement – have assured their party that they are not committed to go along with Netanyanu’s annexation plan in all circumstances. Netanyahu chose to bring his smartest negotiator, Knesset Speaker Yariv Levin, to the meeting. Friedman will have had his work cut out to broker a consensus between the two party leaders and their disparate views.

But underlying this task was an even tougher one: To somehow keep the Trump Mid East plan from being pulled into pieces. Kahol Lavan is in close rapport with the plan’s author, President Trump’s senior adviser Jared Kushner, who has invested considerable effort in talking moderate Arab leaders. Including the oil-rich Gulf governments, into accepting the plan by focusing on the prosperity that peace would confer on the region, accompanied by a negotiated resolution of the Palestinian problem and normal relations with Israel.

Netanyahu’s prospective annexation plan has thrown a cat among the pigeons.

On Friday, the UAE ambassador to Washington went to the trouble of sending Israelis a message in Hebrew stating simply that they can’t have annexation and also normal ties with the Arab world. They must choose one or the other.

The message to Netanyahu  two days later from Yesha Council (the settlement municipal councils) was just as simple: “We want you to be the first prime minister to apply sovereignty, but not if it means being remembered as the prime minister who laid the foundations of a Palestinian State.”

Ambassador Friedman will have to draw on all his diplomatic skills to keeping these conflicting views from dismembering the US president’s well-intentioned document.

Various “compromise” proposals are meanwhile being floated in Jerusalem. Netanyahy would proceed with his sovereignty outline in stages rather than going all the way to claiming the 30pc of the West Bank allotted by the Trump blueprint (which also calls for a 4-year settlement construction freeze and negotiations with the Palestinian statehood on the remaining 70pc.)

One idea is to start with annexing two large blocs i, e. Gush Etzion in the south and Maale Adummim east of Jerusalem. Another idea is more detailed. Annexation would not start with the large settlement blocs but apply only to Israeli towns in Judea and Samaria. Some of the settlers like this proposal because it would not entail mapping territory and boundaries – either for Israel or, and this is the main point, for delineating a Palestinian state.

Although the European Union never accepted the Trump Mid-East peace plan, this is not preventing the bloc’s foreign ministers from insisting on a hearing of their input in a conference call on Monday to US Secretary of State Mike Pompeo. Their main concern is holding Israel’s hand against going forward with annexation. The Europeans will try and persuade Pompeo to try where they failed.