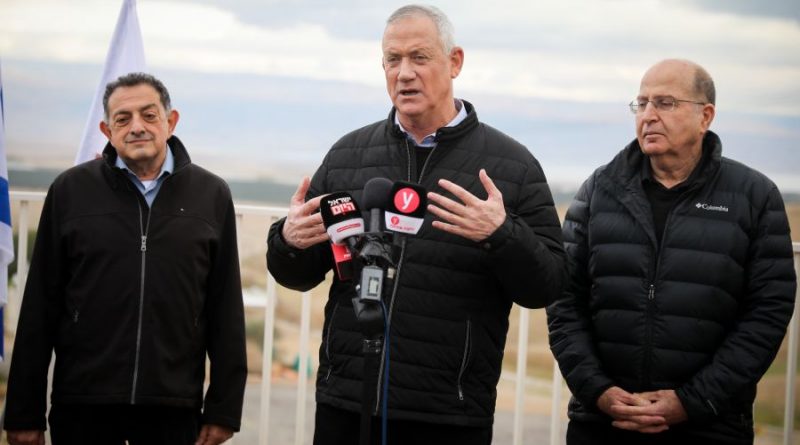 Opposition Kahol Lavan’s leader Benny Gantz backpedaled on his objections to the Trump peace plan’s release before the March election, while also pledging, if elected, to extend Israeli sovereignty to the Jordan Valley, Israel’s eastern defense wall –  “in coordination with the international community,” During a visit to the Jordan Valley on Tuesday, Jan. 21, Gantz said: “I hope President Trump will expedite the publication of his peace plan and release it soon. Many dramatic things are happening in the Middle East.”

Prime Minister Binyamin Netanyahu, who had earlier advanced a plan to annex the Jordan Valley, reacted on the spot by calling for an immediate Knesset session to endorse the step without delay, now that it was consensual. Why wait for the election? He asked.

DEBKAfile’s sources report that, when Gantz asked to meet administration officials to air his views about delaying the peace plan’s publication, he was given the cold shoulder. He was also politely turned down when he asked to meet Vice President Mike Pence during his visit to Jerusalem this week for the 75th anniversary of the Liberation of Auschwitz ceremonies.

According to our sources, President Donald Trump has not yet decided when to release the plan. For now, this is still under discussion with certain Arab rulers. The tendency at this time appears to be not to publish the entire document, only sections, one of which covers Israel’s annexation of the Jordan Valley and the western shore of the Dead Sea.
The key conversation that Trump conducted on the question took place on Jan. 6, when Saudi Deputy Defense Minister Prince Khalid Bin Salman visited the White House. The prince said that the Riyadh government had no objections to publishing the peace plan in part. Similar replies came from Egyptian President Abdel-Fatteh El-Sisi and United Ara Emirates ruler Sheikh Mohammed Bin Ziyad.
VP Pence will also likely discuss the partial release of the Trump peace plan when he and the president’s special adviser Jared Kushner see Netanyahu later this week in Jerusalem.