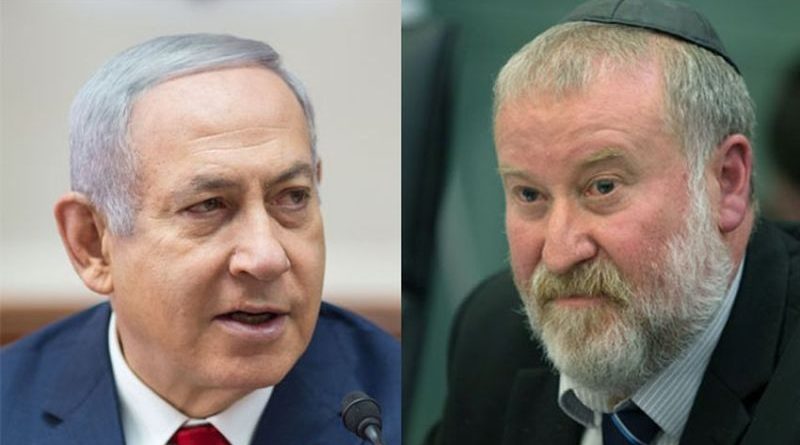 Last minute update: On Thursday night, Nov. 21, Prime Minister Binyamin Netanyahu in a powerful fighting speech sharply rebutted the Attorney General Amihai Mandlblit’s decision two hours earlier to indict him on charges of bribery, fraud and breach of faith. He accused law enforcement authorities of conducting “a polluted, tendentious inquiry” designed to set him up personally “for removal as prime minister.” Netanyahu vowed he would continue to lead the country unless forced out by a High Court petition. He accused the police and prosecution systems of years of legal abuse, citing examples. The people have lost faith in the law enforcement authorities, he said. They deserve a decent, law-abiding system, and he demanded that an external, nonpartisan commission of inquiry investigate the investigators and clean up the system.

Mandelblit earlier laid out in a public press conference his reasoning for deciding to indict the prime minister for bribes – the first time in Israeli history – saying he did so with a heavy heart but in full conviction that he was performing his duty.

Netanyahu fired back by charging that police investigators backed by the prosecution built the cases against him by extorting admissions from witnesses with threats.

Netanyahu said he was proud of what he had achieved for the country as its prime minister and vowed to continue. He was certain that in a third election, the voters would reach an honest decision to stand by him instead of those sworn to bring him down.

The background to this event was provided in an earlier DEBKA Weekly report:

A country that holds its third general election in a year can’t claim to be politically stable, to say the least. Yet this is what is forecast for the first time in the Israel democracy’s short 72-year history. Israel finds itself falling into political limbo at a time of grave security peril coupled with economic uncertainty.

For two decades, Israel was lauded as one of the most thriving economies in the world, boasting a growth rate of around 5 pc per year. But the dead hand of political chaos in past months is damping down this upward spiral, while buckets of shekels are being siphoned off from the budget to fill the yawning gap in US and Israel defenses exposed by Iran’s cruise missile attack on Saudi Arabia’s oil infrastructure on Sept. 14.

Israel therefore stands at a critical crossroads shaken by a political crisis compounded by an unforeseen threat to its security.

Politics in Israel fall traditionally into three rough groupings, left-of center, right and right of center and different shades of religious principles. Campaigning in the past tended to consist mainly of ideological polemics rather than personality. Security dominated political discourse, while the economy and social affairs were usually sidelined. Personal rivalries among politicians were certainly present but kept vocally in the background of more pressing issues.

And so the first campaign that brought the Likud leader, Binyamin Netanyahu, to the premiership in 2009 was dominated by the thorny Palestinian issue and dilemmas over demands to cede areas Israel captured in the 1967 War for the sake of peace. Netanyahu carried that election on the tide of his reputation as Mr. Security and architect of economic prosperity.

However, much has changed in the course of his unprecedented decade in the driving seat. Identity politics based on persons is smothering the discourse on ideas. His own fortunes changed in 2016, when, under heavy pressure from his rivals, the police began investigating him for alleged corrupt practices.

He was not the first prime minister to face such charges. In 1978, the late Yitzhak Rabin and, in 2001-2004, the late Ariel Sharon were investigated, although neither were prosecuted. However, for three years, the state prosecution and police have persevered in loudly publicized efforts to find evidence in support of the charges against Netanyahu. Beaten at the polling booths, his foes whipped up constant frenzied demands for him to step down before the police finished their work.

On Jan. 29, 2019, the cloud hanging over the prime minister spawned a new political party dedicated solely to ousting Netanyahu from office in the April election.

This party, calling itself Kahol Lavan (Blue-White), was set up by three former IDF chiefs of staff, one of whom was a former defense minister who fell out with Netanyahu, and an opposition party leader. The foursome chose Benny Gantz as their candidate for prime minister despite his complete lack of political experience. Kahol Lavan did not bother with a platform, calls for political reform or policies different from those of the incumbent government, although the populace would have eagerly welcomed change. It ran exclusively on a pledge to remove Binyamin Netanyahu from the premiership.

That campaign was substantially boosted when Attorney General Amihai Mandelblit announced that he had decided to file three indictments against the prime minister – subject to a hearing of the defense counsel’s arguments, which took place in early October this year. Netanyahu fought back by accusing the prosecution, the police and some mainstream media of ganging up for a political conspiracy to overthrow him.

In the April vote, Blue White ended second only to Likud and, in the September election, it edged into first place by one seat, after labeling the prime minister a criminal without waiting for his formal indictment. Scrapped were the traditional divisions into three ideological groups, since the new political entity appeared to have no distinct political identity.

Netanyahu raised barriers against this offensive.

The Bloc of 55 – members of his Likud, right-allies and religious parties – stood firm behind him, against Kahol Lavan’s attempts to poach its members and so gain a 61-majority for building a government. This bloc made sure Netanyahu would have enough support to invoke the immunity law that protects a sitting prime minister from indictment until he leaves office. The attorney general is expected to announce his decision on indictments next week.

Benny Gantz had meanwhile run out of time and at midnight on Wednesday, Nov. 20, handed back the mandate he received from the president to form a government, after failing to gather more than 44-47 lawmakers for a coalition.

None of his denigrators expected Netanyahu to outlast the massive assault for his ouster as long and as doggedly as he did. Nor was Gantz, whose party came first in the election, expected to fail and so drag down the prospect of a new government rising in Jerusalem.

President Reuven Rivlin blamed both leaders for missing the chance to join hands for a unity government, accusing them of placing personal differences ahead of the national interest. He had advised them to negotiate a power-sharing deal since neither leading party had won a majority. However, identity politics taken to absurd extremes had taken over and the country appeared to be heading towards yet another election in the months ahead at the end of another mud-slinging campaign. The law governing the dissolution of the Knesset also sets the date of the next election which, according to law, “shall be no later than five months” from its promulgation. In those intervening months, Netanyahu remains in office at the head of an interim administration, while the government and Knesset function at half-cock.