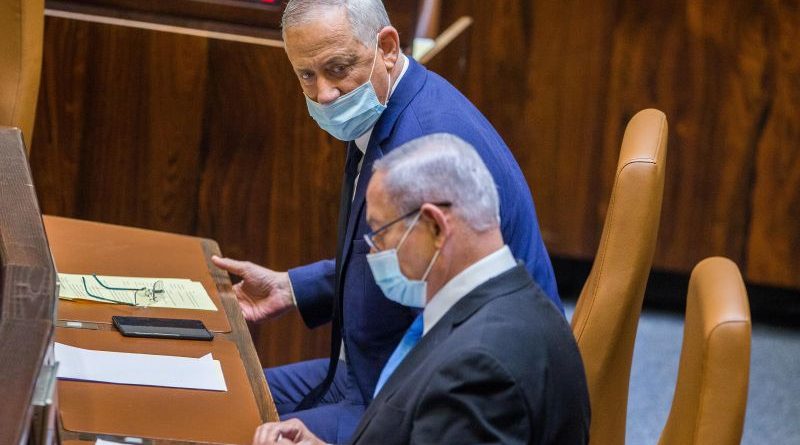 The bones of contention between the two parties leading the coalition government pile up day by day. After just seven months in power PM Binyamin Netanyahu’s Likud and Kahol Lavan’s alternate PM Benny Gantz has hit a pitch of discord that brought a senior minister to rule that “this government is at the end of the road and a new election cannot be avoided.” March 2021 is cited as the most likely date.
The middle echelons of government seem to be functioning up to a point in between the frequent crises at the top. Decisions go forward for controlling the coronavirus pandemic and for military operations. Underway are issues of security and the peace process with Arab states promoted by the Trump administration. Local authority is, more or less, on top of town management. Even the Palestinian Authority has finally come around to restoring security cooperation with Israel after months of boycott.

But many functions are still crippled or put on hold for lack of a state budget, a longstanding bone of contention between Likud and Kahol Lavan.

The discord flared to seismic proportions this week. On Monday, Nov. 23, Benny Gantz, who serves as defense minister told his Kahol Lavan party faction that he is considering snatching the initiative from the opposition and himself tabling no-confidence in the government in which he serves. The opposition was preparing to file no confidence next Wednesday. Gantz explained that since nothing is about to change in the functioning of government, he sees no alternative to a new election.

Netanyahu’s Likud, for its part, flagged casus belli when Gantz as defense minister ordered an inquiry into alleged irregularities in the five-year old purchase of submarines from Germany, although a police investigation is underway and five months ago Gantz accepted  attorney general’s decision to absolve Netanyahu of involvement.

The inquiry panel, whose chair, former judge Amnon Shtrasnov is on record for urging the prime minister’s ouster, was given four months for a ruling, namely March. Since that month is widely projected as the date of an election, Gantz was accused of trumping up the submarine inquiry to kick off his election campaign. The prime minister accused his Kahol Lavan partner of “shamefully exploiting defense and the military for political ends.”

The prime minister had just come home from a surprise flight to Saudi Arabia for important strategic talks with Crown Prince Mohammed and US Secretary of State. He was hoping for a triumphant return. But, having flown off without a word to his Kahol Lavan rivals, Benny Gantz and Foreign Minister Gaby Ashkenazi, they were gunning for him o his return. This was not the first time Netanyahu had left them in the dark on key policy moves.

Was this the episode the kiss of death for the ill-matched partnership that started out last May with a brave pledge of unity for tackling the coronavirus crisis? Likud’s partnership with a large breakaway segment of its bitterest enemy, Kahol Lavan, headed by Benny Gantz, was rarely free of squabbles. Their pact to rotate the premiership from Netanyahu to Gantz in exactly one year was never expected to come true.

Nevertheless, while the heat rises over the ill-matched government amid confident predictions of its imminent demise, it may be recalled that one crisis after another has been patched up, usually by smart machinations by Netanyahu and Gantz holding back on irreparable steps. This may still happen, depending on a number of complicated factors.

Netanyahu still has more than a month to to the new deadline for submitting a state budget to head off the government’s automatic fall, Kahol Lavan’s most insistent demand. This is in the prime minister’s hands, unlike other uncertainties. He, like the country, is on tenterhooks to see whether the strategy of that a staged exit from covid closures which he is leading leading whips up a fresh disastrous surge in infection and a third lockdown or succeeds in holding the pandemic in check – until a vaccine becomes available in the coming months.

Another unknown factor testing political nerves is the incoming Biden administration. From January 20, the prime minister will be bereft of his close friends at the White House and then what?

And finally, Netanyahu’s lawyers are trying to delay the next Jerusalem District Court sessions of his trial on charges of graft from January. If they fail, hostile prosecution witnesses in court would make constant national headlines while he is running for re-election.
A spring election will therefore find Netanyahu struggling in infested waters.

Gantz’s quandary is just as tough. He commands a small parliamentary faction which is falling progressively in opinion polls and may plummet in an election. He could of course go hat in hand to rejoin the opposition segment led by firebrand Yair Lapid, who would not step aside for the returning leader. An election in the coming months would therefore be a risky gamble. If this government nonetheless survives another year, Gantz has his only chance, however slim, of occupying the prime minister’s seat.

An early election is therefore not a foregone conclusion, provided the political duelists at the head of the coalition make way for cooler heads.