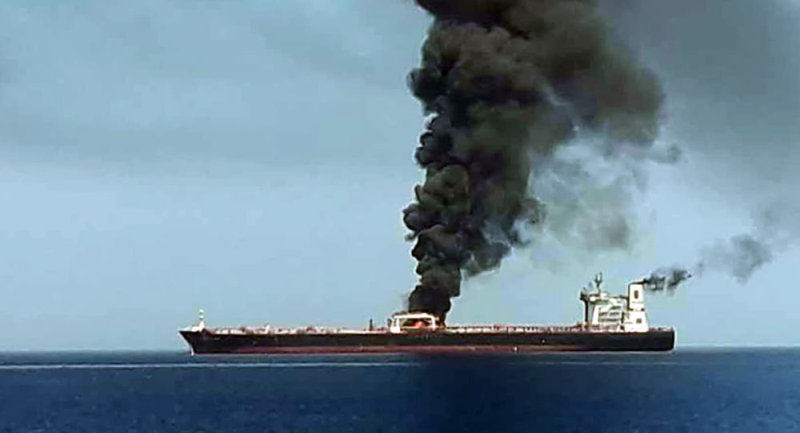 Explosions on two super oil tankers in the Gulf of Oman on Thursday, June 13, confirmed the apprehension cautiously voiced by Gen. Frank McKenzie, US Central Command chief on Thursday, June 6: Although Iran has chosen to “step back and recalculate” the general asserted: “I don’t actually believe the threat has diminished. I believe it is very real.” He stressed that Iran’s potential for aggression was a cause for concern and refused to rule out requesting additional US forces to bolster defenses.

The explosions on two supertankers on Thursday represented Tehran’s advance to the next phase of its three-step campaign of escalating aggression for US sanctions. The timing of the latest attack, during Japanese Prime Minister Shinto Abe’s visit to Tehran in an effort to lower US-Iranian tensions, shows Iran has chosen to raise the stakes rather than de-escalate.

To drive that message home, supreme leader Ayatollah Ali Khamenei administered a brazen insult to the United States: He told Abe that he did not consider President Donald Trump “worthy of an exchange of messages” with him. “I do not have and will not have any response for him,” he told the Japanese prime minister, crudely knocking down his visitor’s effort to ease spiraling US-Iranian tensions. Khamenei went on to say that Trump’s promise not to seek regime change in Iran was “a lie” and he did not believe Washington’s offer of “honest negotiations” with Tehran.

Not content with that insult, Iran’s Foreign Minister Javad Zarif suggested that American provocation was behind the “reported attacks on Japan-related” oil tankers in the Gulf of Oman. That they took place while the Japanese PM was meeting the supreme leader was “beyond suspicious,” Zarif tweeted.

DEBKA Weekly’s military sources report that behind Iran’s attempt to throw off suspicion for the month-long attacks on US allies lies the discovery by US intelligence that the Iranian Revolutionary Guards were responsible for the explosions on two supertankers in the Gulf of Oman on June 13, just as they were for sabotaging the four tankers a month earlier opposite the UAE port of Fujairah.

Thursday’s attack in the Gulf of Oman signaled the start of the second stage of the program masterminded by Al Qods chief Gen. Qassem Soleimani after the first failed to compel Washington to ease the harsh sanctions against Iran’s oil trade..

DEBKA Weekly sources add that Khamenei’s decision to throw down the gauntlet puts President Trump on the spot for picking it up. Trump has until now held to his resolve to avoid a military clash with Iranian forces in the Gulf, the Middle East or in Syria. However, the all-powerful Iranian leader has raised the stakes to prove his theory that America is just a paper tiger and Iran’s strategy of belligerence will pay off and confirm its standing as the leading regional power.

Against the first round of Iranian attacks, Trump stuck to a policy of military restraint, confronting Gen. McKenzie with the dilemma between acting to deter Iranian aggression while obeying the White House directive for military restraint. That policy failed to hold Iran in check. Now it has been seized on by Khamenei as a stick for beating Washington. He has thrown the US president’s preferred face-to-face engagement with the top men for striking deals out of the window.

DEBKA Weekly’s intelligence and military sources report that the CENTCOM chief was not surprised by Thursday’s attack on the two supertankers. He had been warned in daily intelligence briefings that Iranian and Iraqi Shiite militia forces were on the move in preparation for continuously escalating military action against the US and its allies in the region. The three-stage plan had been set out at a meeting in early May between Khamenei and Iran’s Middle East military commander, Al-Qods chief Gen. Qassem Soleimani. The CENTCOM chief had to bite his lips, since US forces were barred by the White House from credible proactive deterrence.

The first stage started a month ago with attacks on the Saudi tanker route carrying oil to the US, sabotage of allied oil infrastructure and vessels and a rocket attack on an Israeli military target. The supreme leader, in approving the plan, ordered the final component set aside for his personal nod: Attacks on US military bases in Iraq and Syria – the Ain al-Assad Air Base in western Iraq and the Al Tanf garrison in eastern Syria – were therefore postponed. Instead, Soleimani was told to set up a rocket attack near, but not at, the US embassy in Baghdad for May 19, as a warning shot for Washington.

McKenzie had hoped that progress in the secret negotiations afoot between Washington and Tehran in Baghdad (see separate article) would alleviate the threat. But if the Swiss and Iraqi mediators failed to achieve a breakthrough on sanctions relief, he knew Khamenei would switch on the next stage. That stage, which was launched on Thursday, is expected, according to the latest information reaching our sources, to consist of more punishing attacks on Saudi Arabia, Israeli and other US allied targets and missile or rocket fire targeting US bases in the Gulf, Iraq and Syria.

In the third round of the Khamenei-Soleimani war plan, Iran would engage US military forces in the region in direct warfare. The Trump administer could then no longer avoid ordering Gen. McKenzie to counter-attack Revolutionary Guards outposts in the Gulf region or even their home bases on Iranian soil.

Even now, Washington’s failure to use its military might and rise to Tehran’s insulting challenge, would tempt other adversaries, such as China’s Xi Jinping, Russia’s Vladimir Putin and North Korea’s Kim Jong un, to follow Khamenei’s example.