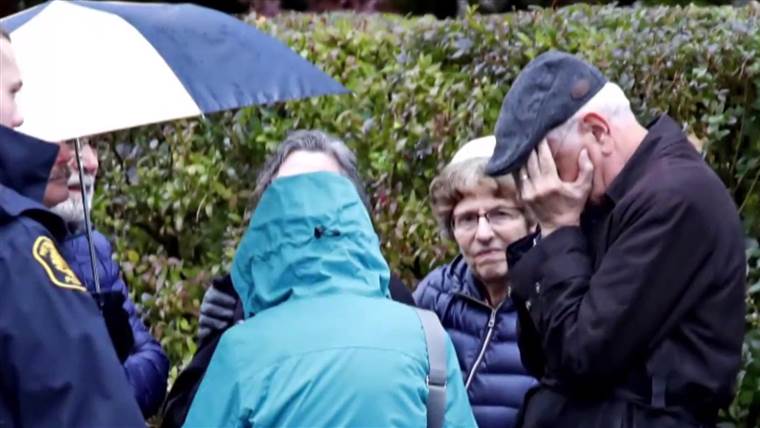 President Trump has ordered flags at half-mast on public buildings until Oct. 31 to mark the deadliest anti-Semitic attack in recent US history, which left 11 dead and six injured, including four police officers at the Tree of Life Synagogue in Pittsburgh. Thousands of people from across the city later gathered for an interfaith vigil to join the mourners. synagogue in Squirrel Hill. The heroism of law enforcement officers who risked their lives to rescue worshipers trapped by the gunman inside the Squirrel Hill synagogue was widely cited.
The chief medical examiner of Pittsburgh’s Allegheny County released the names of the 11 victims of the synagogue shooting in Pittsburgh Saturday. The youngest victim was 59 and the oldest was 97.

David and Cecil Rosenthal were brothers. Bernice and Sylvan Simon were husband and wife. In addition to the 11 victims, two congregants and four police officers were injured.
The mass killer, Robert Bowers, 46, could face the death penalty if convicted of the 29 charges against him. They include 11 counts of using a firearm to commit murder and multiple counts of two hate crimes: obstruction of exercise of religious beliefs resulting in death and obstruction of exercise of religious beliefs resulting in bodily injury to a public safety officer, authorities said.
Education Minister, Naftali Bennett is traveling to Pittsburgh to represent the Israel government in solidarity with the Jews of Pittsburgh and the United States.
DEBKAfile reported earlier:
Shouting “All Jews must die,” a gunman walked into the Tree of Life Congregation Synagogue in Pittsburgh, Penn. during the Sabbath service. He was taken into custody after killing 11 people and injuring at least six, including three police first responders, in a massacre. The first task of the police was to evacuate worshipers trapped in the building, while under fire from the gunman.  He also opened fire on the ambulances and police forces concentrated outside the building including a SWAT team and was finally captured after he staged a shootout from the third floor window of the building.  Officers sheltered behind cars.  Witnesses described a heavy-set white male armed with a semiautomatic assault rifle and two pistols, who entered the building during morning service. He then barricaded himself in a room at the synagogue.

President Donald Trump tweeted he was watching the event. In a second Twitter, he said the incident was “more devastating than was thought. It’s a terrible, terrible thing.”
Initial interrogation of the suspect must discover whether this was a lone crime. He may be charged with a hate crime or terrorism.

The Squirrel Hill synagogue is 150 years old and a popular Conservative place of worship in a predominantly Jewish neighborhood. Four congregations share the building. The doors were not locked during the Sabbath service and there were no guards on the door. These precautions are only taken on the High Holidays.  Synagogue staff have taken training from Homeland Security instructors. Following the attack, US police posted special forces at Jewish institutions across the country.