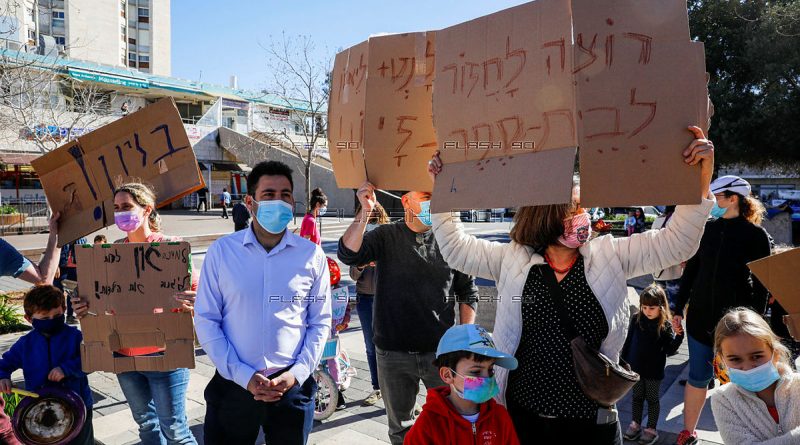 Israelis are pretty much at sea over a small dip in covid infection levels midway through a widely acclaimed vaccination drive and half in, half out of a patchy lockdown. The confused and resentful popular response threatens to undo both achievements.

After days of stumbling between conflicting scenarios, thrown out by rival ministers fighting for re-election, the coronavirus cabinet decided to start reopening schools on Thursday, Feb. 11, to be the second stage of a phased exit from a three-week-long lockdown. However, the provisions and equivocations attached to this decision were too complicated for local authorities and school heads to follow. As a result, no more than one-fifth of Israel’s schoolchildren, preschoolers and 1-4 grades, in “green,” “orange” and “yellow” districts, were free to attend class – even then in small groups and outdoors, with daunting logistics yet to be overcome.

The other four-fifths of children in “red” areas and classes from 5-12 were condemned to continue their year-long confinement to solitary remote instruction
On Thursday, the Jerusalem municipality refused in despair to open any schools at all in the city’s multi-hued districts. (See photo of parents and children protesting in Beit Hakerem.) Other local authorities held out against allowing the hundreds of teachers effusing to accept vaccination to enter the schoolroom. The Health Ministry is looking for a legal way to penalize these teachers by subjecting them to covid tests every 48 hours.

This turmoil finds educators and child psychologists warning of long-term damage facing the “zoom generation.”
The school debacle was accompanied by the spectacle of a roaring traders’ mutiny. The government finally decided, in line with its strategy to reopen trade in careful stages, to set Feb. 23 as the date for reopening street shops, malls, gyms, entertainment sites and sports events, and on March 9, restaurants, cafes, hotels, events halls and the intermediate 7-10 school classes. Businesses would be required to demand certificates of vaccination from customers. The cabinet’s decision to reopen the economy next month was predicated on 4 million Israelis having received the two doses of the vaccine.

However, on Thursday morning, three large malls, as well as some hotels and eateries, decided not to wait any longer. Hundreds of thousands of small shops and businesses have sunk forever in the past year and many others are on the verge of bankruptcy. The morning saw clashes between shop owners, police officers and health inspectors, who handed out fines and closure orders.

This wholesale defiance of government rules, which heavily disrupted Israel’s third lockdown, is spreading as it winds down. Confidence in the steps taken by an embattled government is right down. Israel’s vaccination drive is slowing, although a strenuous official campaign with incentives is in progress to make it worthwhile for people to take the jabs – not least when the campaign’s success is striking.

Data collected by the Ministry of Health show a 41pc drop in confirmed covid-19 infections from mid-January to early February in the above-60 age group, after around 90pc were vaccinated, and a 31pc drop in hospitalizations. In comparison, for people aged 59 and younger — of which just more than 30pc have been vaccinated — cases dropped by only 12pc and hospitalizations by 5pc in the same period.

Two million Israelis aged 18-50 remain to be inoculated and it is there that the reluctance to take the vaccination is pronounced – most particularly in some of the ultra-Orthodox and Arab communities. False rumors on social media alleging negative long-term effects of the inoculation must be fought.
Unlike many other countries, Israel enjoys the luxury of enough vaccines to go around. The local Teva Pharmaceutical Industries is in talks with major covid-19 manufacturers to co-produce urgent supplementary output of vaccines to combat the highly transmissible new variants of the virus at large. This was disclosed on Wednesday by Teva’s chief executive Kare Schultz.

Teva has already partnered the Pfizer vaccine rollout in Israel. Its SLE logistics division handles all the vaccines in an underground facility near Israel’s main airport. Thirty large freezers set to minus 70 degrees Celsius (-94 Fahrenheit) can hold 5 million doses.

The small dip in Israel infection registered on Wednesday amounted to 5,625 new cases (down from 7,000 plus ast week) and 7.5pc positive tests (down from nearly 9pc). But an additional 28 seriously ill cases in the las 24 hours pushed the total up to 1,027.

Friday saw a distinct improvement. New covid cases dropped to 4,922 on Thursday, below five thousand for the first time in months, while positive tests fell to 6.7pc. The number of seriously ill in hospitals dipped to 985, the lowest figure since Jan. 8 and the critical R factor declined to 0.88.  However, 15 coronavirus patients died overnight, pushing the mortality total in a year to 5,286.

Given the partial effectiveness of lockdowns and the mounting public resistance, vaccinations remain the only readily viable tool for curbing the virus and its mutating variants.