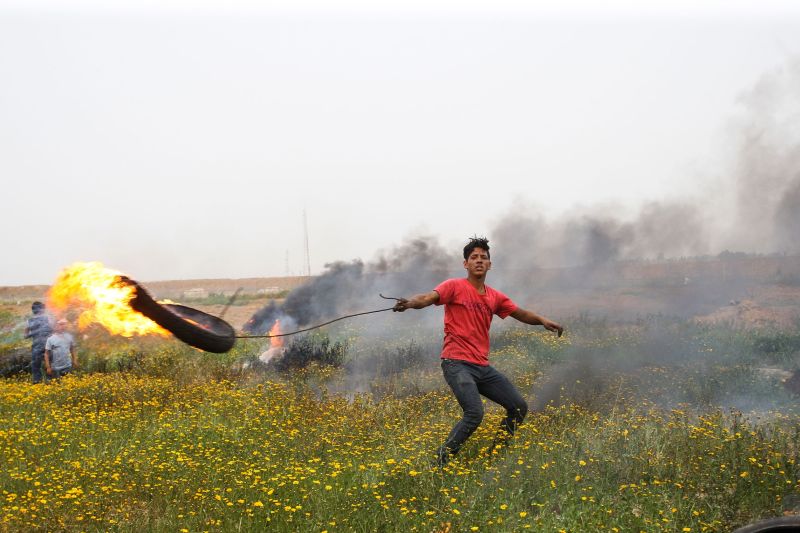 Ever since early February, the Palestinian Hamas terrorist organization that rules the Gaza Strip was widely described by most experts as a declining force – riven by internal disputes between its political and armed wings, losing popular credibility over the economic and humanitarian disasters gripping the enclave – in short, clinging by its toenails to the edge of a cliff. Then, all of a sudden, in the last week of March, the truth came out. Hamas had been working its propaganda machine to generate a false picture of woe and misery and hoodwinked all the parties involved in Gaza’s problems, while cooking up a big scheme.

Even Egyptian President Abdel-Fatteh El-Sisi, who has worked tirelessly to unify the Palestinian movement by patching up the Hamas feud with the rival Fatah party and its leader, Palestinian Authority Chairman Mahmoud Abbas (Abu Mazen), fell for the ruse. So did Abu Mazen who, at 83, found himself and the PA upstaged as corrupt losers, who no longer spoke for the Palestinian people.

And so, too, did the top brass of the Israeli Defense Forces (IDF); they were too busy developing two major security projects: finding and destroying the Hamas terror tunnels snaking from Gaza under the border into Israel; and constructing the deeply-sunk steel and concrete barrier around the perimeter of the enclave. This barrier is designed to obstruct new tunnel-building and hold back terrorist squads bent on attacking civilians and military targets. The negative environment the Hamas masquerade spread over the Palestinian issue also prompted the Trump administration to abandon its peace plans.

After pulling the rug from under all these concerned parties, Hamas has emerged with big plans for a six-week civil protest campaign, and flush with cash for splurging on a making it a spectacular event, to climax on sensitive anniversaries along the way, such as the May 14 dedication of the US embassy in Jerusalem; and the May 15 70th anniversary of Israel independence, which the Palestinians mark as Nakba day, Day of Disaster, and any dates in between, such as Israel’s eight-day Passover beginning on March 30.

Preceded by the terrorist group’s first ever “military exercise,” Hamas engineered a two-track operation. Up front, the March of Return protest was set to go forward as a “peaceful protest”, while at the same time, its “commando” squads conducted infiltrations across the border into Israel to mark out a path for future terrorist attacks..

Exhibiting high organizational skills, Hamas hired a fleet of buses to collect worshippers from all the mosques in the Gaza Strip on Friday, March 30, at 10 a.m. sharp and drive them to a line 500-700 meters from the Israel border, where their preachers lead them in prayer. Participants in the Great March or Return are housed in six tent encampments set up parallel to the 69km-long border, with all the amenities for attracting reluctant volunteers to stay for the six-week campaign. three meals a day, running water, bathrooms and showers, medical facilities and Internet connections and even smooth pathways lined with beds of flowering shrubs. A sandbank separated the protesters from the border.

These preparations are the visible side of the Hamas campaign. The hullabaloo surrounding the March of Millions scheduled for Friday riveted the attention of Egypt, Israel and the Palestinian Authority security services. Thanks to this distraction, they all missed the import of the subversive actions which Hamas had stealthily set in train much earlier.

On March 13, the Palestinian Authority was targeted by a small bomb that was detonated as the convoy of the PA Prime Minister Rami Hamdallah and Intelligence chief Gen. Hamad Faraj drove into the northern Gaza Strip. Neither was hurt, but if there had been any prospect of a reconciliation between Fatah and Hamas up until then, it faded into the distant future. President El-Sisi’s good offices were buried.

On March 22, Hamas security forces raided a building in the Zeitun district of Gaza City and killed four men, whom they claimed were the would-be assassins of the two officials. In fact, the four men were members of an extreme Salafi sect who had nothing to do with the bombing attack.

On March 24, a Hamas commando squad cut through the Israeli border fence and ignited an Israeli crane used in the construction of the deeply-sunk barrier going up – and down – around the Gaza Strip. All four ran back into Gaza before a shot was fired to stop them.

On March 27, another Hamas squad, this one armed with grenades and knives, cut through the border fence, and evaded the notice of Israeli units posted there long enough to walk 20km up to the gate of the big IDF base at Tzeelim. It was only then that IDF and police trackers caught up with them.

On Wednesday, March 28, a military forklift was set on fire by young toughs on the Gaza side of the border, who then turned back; next, an unarmed Palestinian stole across the border and was detained for questioning.

These incidents show Hamas to be testing the water ahead of its plan to use its spectacular “peaceful” protest campaign as another distraction from its real objective, which is to launch a wave of terror in Israel. This wave will rise as the protest campaign gains momentum.

Astonishingly, it took the IDF and its intelligence branch up until Wednesday to catch on to Hamas’ double game. But neither the IDF nor Hamas can be sure of controlling the massed demonstrators, long inflamed against Israel, for six weeks. They may well be penetrated by secret agents of fellow Islamist terror groups, such as the Islamic Jihad or Salafi sect extremists, some of whom are closely linked with the Islamic State’s Sinai affiliate. These militants may lie in wait until their handlers order them to spring out and head for the border, pulling behind them hundreds of young Palestinians spoiling for violence. Israeli soldiers on guard would then be forced to stop the horde before it surges across for the “return” – first with crowd dispersal measures and then live fire.

16 thoughts on “Hamas Hoodwinks Everyone, including Israel’s Military, with a Double Game”