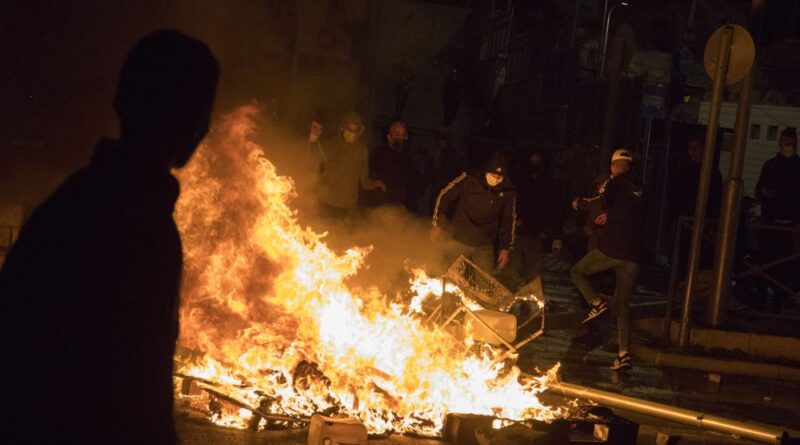 Sirens alerted Gaza’s Israeli neighbors to a 35-rocket barrage fired in 10 salvos overnight Friday and early Saturday, April 23-24. Five were shot down by Iron Dome. The rest exploded on vacant ground causing no harm. The warning had come in a joint statement from Gaza-based Palestinian terrorist organizations in support of the street violence in Jerusalem mounted by Palestinian youths against Orthodox Jews, including an attempted lynching.

Early Saturday, the communities of the Eshkol, Sdot Negev, Shaar Henegev and Hof Ashkelon Councils were told to stay close to shelters as Israeli planes and tanks went into action against Hamas’ posts, rocket launchers and underground network. Civilians were advised to refrain from working in the fields or attending synagogue Saturday morning. The Zikkim beach was closed.

In Jerusalem, police forces forcibly broke up the flaming street battles that exploded after Israeli youths mobilized late last week to hit back at the Palestinian violence flaring in Jaffa and East Jerusalem and spreading since then to the rest of the city and parts of the West Bank. By Thursday night, some 200 Palestinians, Jews and police officers had been injured in the clashes and scores were pulled in and arrested.

The chant of “By our spirit and blood we shall redeem al Aqsa” hanging over the Palestinian mobs showed that a religious, anti-Jewish drive was driving the outbreak rather than the usual nationalist sloganeering.

DEBKAfile’s intelligence sources account for this by the many hands secretly stirring the violent pot. One is Jordanian intelligence, on orders from the royal palace, and the Jordanian Waqf. Two, the Fatah movement ruling the West Bank from Ramallah; three and four, Hamas and the pro-Iranian Islamic Jihad and, four, the clandestine extremist Islamic movement called al-Mourabitun. They all maintain underground cells in East Jerusalem and a presence in Jaffa, another focus of the flareup.
Jordan’s King Abdullah is reacting to a rumored deal between Israel and the Saudi Crown Prince Muhammed bin Salman for the transfer of the religious guardianship of Temple Mount and Al Aqsa Mosque from the Jordanian crown to the Saudi monarchy. This role is essential for supporting the Jordanian Hashemite dynasty’s claim to legitimacy.

The Palestinian Fatah seeks the unrest to support ifs demand for the Palestinian elections scheduled in May, the first in 15 years, be allowed to set up polling booths in East Jerusalem for Palestinian residents. Israel rejects this as a maneuver for re-dividing its capital. Fatah, which is headed by Palestinian Authority Chairman Mahmoud Abbas, later seized on the riots as a pretext for postponing the elections once again, this time to fend off a certain Hamas victory and takeover of the West Bank as well as the Gaza Strip.

Hamas is using street battles to protest against the collective arrests of its West Bank leaders by Israeli security forces. They too are intent on averting a Hamas victory.

Al Mourabitun was chosen to spearhead the violent campaign, so accounting for its jihadic nature.. This clandestine fundamentalist group is fired with religious fervor and has experience in inflaming religious violence among Palestinian Muslims. Based on Temple Mount, this group, which takes its name taken from the Koran,, calls on the faithful to defend the holy places of Islam against infidels. Its two separate wings for men and women are dedicated to guarding the Muslim institutions and shrines of Temple Mount against the Jews.

The Palestinian rioters therefore believe that they are fighting the good Muslim fundamentalist fight against their fundamentalist foes, Orthodox Jews. The Jewish group, Lahava, which joined the Palestinian assailants in battle when the police delayed, have only added fuel to the fire. It is hard to blame the Jerusalem police for failing to nip the violence in the bud or understand its direction, now that the clashes are going into their second week. Understanding the deep-rooted motivation involved is rightly the job of the security and intelligence services.