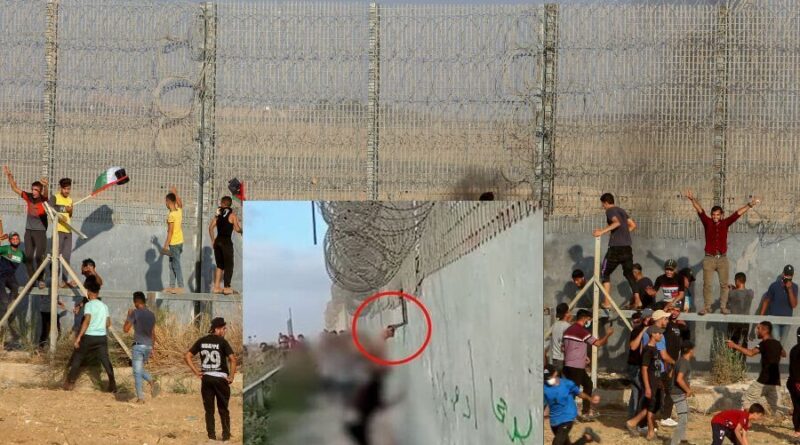 Hamas staged a mob assault on the Gaza-Israeli border on Saturday, Aug. 21 just two days after Israel consented to Qatar transferring $10 m in aid funds to the Gaza Strip. This wasn’t just another piece of routine Hamas aggression. Thousands of violent Palestinians, some bearing firearms, hurled themselves at the border, shooting and lobbing rocks and firebombs at the Israeli troops guarding the border. Some tried to climb over the border fence.

For the first time, they tried to grab the barrels of the soldiers’ sidearms that protruded from firing positions in the concrete wall enclosing the border. In one such attempt, a Palestinian drew his own pistol to shoot a member of the Border Police southern unit at point blank range. 1st Sgt. Barel Hadaria Shmuel, 21, from Beer Yakov was flown to hospital in critical condition from a head wound.

Israeli fighter jets early Sunday morning struck four of Hamas’ weapons workshops and depots. The military announced: “A broad operation was launched in response to the breaches of order in the northern Gaza Strip in the course of which shots from the enclave injured a Border Police officer.”

DEBKAfile’s military sources: This scale of the Palestinian riot and the use of firearms undoubtedly caught Israel’s government and military leaders by surprise. They were confident that a deal for calming the Gaza situation had been reached and the Hamas and Islamic Jihad terrorists had been reined in by the influx of Qatari dollars and Egypt’s intervention.
On Wednesday, Aug. 18, Egypt’s Minister of Intelligence Abbas Kamel sat down with Prime Minster Naftali Bennett in Jerusalem. It was agreed that Cairo would act as broker between Israel and the Gaza Strip to keep the situation under control. They also set out a joint position on the issue for the prime minister to present to President Joe Biden when they meet at the White House this coming Thursday. The Egyptian minister handed Bennett an invitation from President Abdel-Fatteh El-Sisi for an early visit to Cairo.

This process was undermined by Hamas’ violent tactics. The leaders of this terrorist organization made it clear that they would scuttle any deals for the Gaza Strip that Israel and Egypt may achieve with the Biden administration – unless they are directly involved. Undeterred by IDF bombings, the Palestinian terrorists may be expected to keep the flames burning high in the runup to Bennett’s trip to Washington.