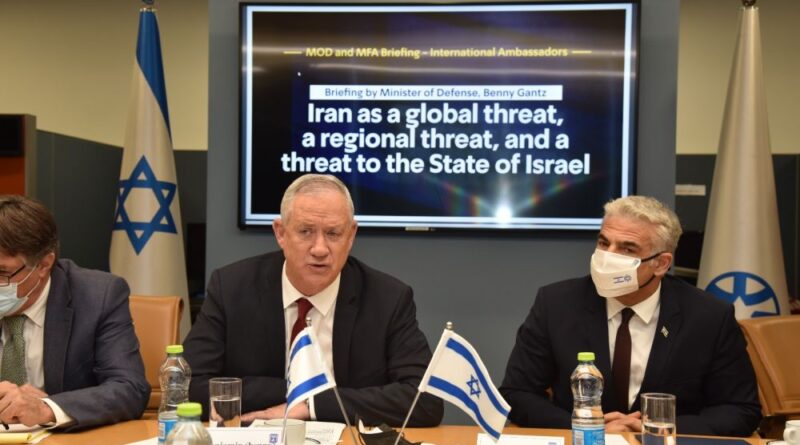 No comment came from Prime Minister Naftali Bennett after Defense Minister Benny Gantz broke with Israel’s longstanding opposition to fresh nuclear diplomacy with Iran. “The current US approach of putting the Iran nuclear program back in a box, I’d accept that,” Gantz told Foreign Policy in an interview published on Sept. 15. He couched this backtrack in the language used by the Biden administration to pitch the revival of the 2015 nuclear deal with Iran, a policy against which Israel has consistently fought.

Did Gantz speak on behalf of the Bennett government or off his own bat?  The three-months-old coalition government’s position on this issue is not altogether clear. Foreign Minister Yair Lapid cast doubt on the assessment headlined by the New York Times on Sept. 13: “Iran has come within roughly a month of having enough material to fuel a single nuclear weapon, crossing a threshold.” In Lapid’s view, Iran was still “some months” away from this goal.

For many years, the US and Israel were at extreme odds on a key question. While one administration after another, including the current one led by Joe Biden, publicly vowed to prevent Iran ever acquiring a nuclear bomb, Israel insisted that Tehran must never be allowed to reach a nuclear threshold, i.e,, the acquisition of all its components including fuel.

Gantz, say DEBKAfile’s security sources, may have given way to Washington on this cardinal point of dissent, although no government, security or military forum is known to have approved this radical policy change – or even discussed it. In fact, the disagreement was not bridged in Bennett’s first face to face with Biden at the White House last month, although the prime minister agreed to moderate his government’s tone against US policy.

Gantz’s comments will no doubt strengthen the Biden administration’s hand in its approach to renegotiating Iran’s nuclear program. Although Gantz added in the interview “If push comes to shove, we’ll get there. We’re not America but we have our capabilities,” his comments will be taken as ceding to Washington control of Israel’s Iranian policy. Iran will be able to conclude that the threat of an Israeli military strike against its nuclear sites has lessened, even as it strides forward a nuclear threshold.

Iran meanwhile sticks to its predetermined course regardless. DEBKAfile’s Iranian sources report that optimism over Tehran’s invitation to the IAEA chief Rafel Grossi to come over on Sept. 12 and restore international inspections of nuclear sites, was short-lived. He was told that the cameras installed by the international watchdog at sensitive nuclear sites could be reactivated after they were switched of. It turned out later, however, that most of the cameras were irreparably damaged, whether by the explosion that bit the Natanz enrichment plant in April or wanton destruction by Iranian technicians at the sites.
In any case, Iranian officials show little interest in going back to the table. Renewed talks on a nuclear accord rate low on their scale of priorities. According to one voice, “You can’t turn the wheel back.”

The apparent crack in Israel’s powerful stand against the key steps towards a nuclear-armed Iran as an existential peril for the Jewish state is also causing concern in Cairo, Riyadh, Abu Dhabi and other Gulf capitals which had counted on Israel as a bulwark against Tehran coming within reach of a nuke.

Israel’s new prime minister is to attend the UN General Assembly opening this week and is expected to deliver a speech. He can’t avoid being compared to his predecessor Binyamin Netanyahu who gave no quarter to Iran in thunderously castigating its evils before the world body.