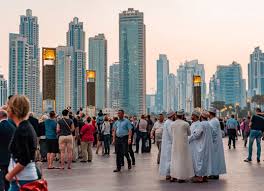 The warning of Iranian or proxy terrorism issued by Israel’s security officials was based on incoming intelligence that Tehran’s revenge for the death of top nuclear scientist Mohsen Fakhrizadeh last month would likely come in the form of terrorist attacks. The Lebanese Hizballah, which maintains a clandestine global network, would be the foremost candidate proxy for this operation. The security advisory issued by the Coounterterrorism Authority in Jerusalem on Thursday, Dec. 3, specifically warned Israeli travelers that they risked being targeted on their trips to the UAE’s Abu Dhabi and Dubai, Bahrain, Georgia, Azerbaijan, Turkey. semi-autonomous Iraqi Kurdistan and parts of Africa. They were told to be extra vigilant and avoid crowded places, unsecured locations and government centers.

Thousands of Israelis, enthusiastic globetrotters – even during the covid pandemic, are currently vacationing in Abu Dhabi and Dubai. Around a hundred flights to those destinations are scheduled for next week in the first eager flush of friendship generated by the epic UAE normalization pact with Israel.

They have now been made aware of the active Iranian and Hizballah networks lurking in nearby Qatar, and their penetration by these hostile elements of expatriate Lebanese and Shiite expatriate communities in East Africa. Government officials were instructed to postpone planned trips to the Gulf. Extra guards are posed at Israel’s overseas diplomatic missions and Jewish centers.

The threat may also hang over those staying at home. On Friday, security officials alerted former nuclear research and other senior staff of the Dimona nuclear research center in southern Israel to danger. They were advised to alter their regular habits. including walking routes, refrain from opening strange packages, and be on the lookout for unusual events. Since the Fakhrizadeh death, they were told that Iranian spies may be monitoring their’ activities online and on social media

Conscious of the terrorist threat from Iran and its proxies, the US State Department this week decided to pull dozens of staffers from its embassy in the fortified Green Zone of Baghdad, this being the aftermath of the Fakhrizadeh killing and the first anniversary date of the US drone attack that killed Qassem Soleimani. Tehran has vowed revenge for both these grave losses

For the past decade, US and Israeli intelligence have kept a close watch on the covert networks run by Iran and Hizballah worldwide and their nefarious activities.  This year, the US posted a standing reward of up to $10m for information leading to the disruption of its financial mechanism, which is built around a criminal drugs-cum-money laundering system.

Last May, on a tip-off from Israel’s Mossad, Germany discovered Hizballah’s illegal operations on its soil and banned it as a “Shiite terrorist organization.”

In July 2012, Hizballah targeted a group of Israeli tourists in at Burgas airport in Bulgaria, killing six people – five tourists and the local driver. In February of that year, three terrorist bombing attacks on Israeli diplomats in Thailand, Georgia and India fell apart.

Iran and Hizballah have built up far-flung bases of operation outside the Middle East, especially in Latin America with resources for striking US interests far afield. Venezuelan officials have been tied to Hizballah. But the terrorist group’s roots on the continent first surfaced in the nineties in 1994 bombing attacks on the Jewish center in Buenos Aires killing 85 people and injuring more than 300, two years after a Hizballah suicide bomber attacked the Israeli embassy in the Argentine capital killing 21 people and injuring more than 200.

The timing of the next potential terrorist outrage by Iran or its proxies is a matter of speculation. Israeli security experts suggest a time fame before Joe Biden’s swearing-in as president on January 20, but too close to that date to give President Donald Trump time for retaliation. This question was no doubt discussed when US and Israel military intelligence officers met this week to discuss cooperation against an Iranian reprisal.