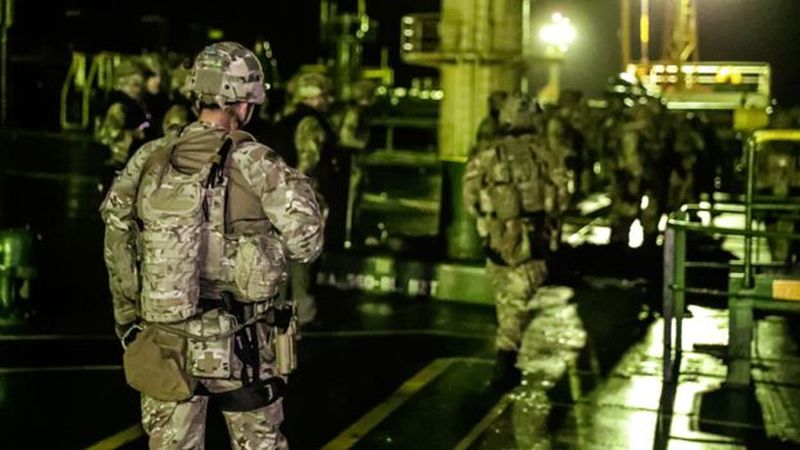 The high alert was declared even before Mohsen Rezai’s threat on Friday, July 5, to seize a British vessel unless the Iranian oil tanker impounded by UK Marines on its way to Syria was released at once. The Panama-flagged Grace 1 was carrying Iranian crude oil for the Banyas refinery in Syria on Thursday, when troops of the Royal Marines boarded and impounded the vessel in keeping with European Union sanctions in force against Syria since 2011. The vessel was towed to port in Gibraltar. The island’s British and Spanish authorities admitted they had acted on US intelligence and meeting a special request from Washington.

Some of the British marines were dropped onto the ship’s deck by rope from a helicopter; a second group clambered aboard from speedboats. An Iranian foreign ministry spokesman called the action a “form of piracy.” The British ambassador was summoned to the office in protest.
Iranian and European diplomats had just spent a week on tough talks on compensation for US sanctions, especially on its oil exports. They ended in impasse. French President Emmanuel Macron had offered to travel to Tehran, provided the Iranians backtracked on their decision to exceed the 2015 nuclear limits on uranium enrichment as of Sunday, July 7. After that letdown, the seizure of the oil tanker was a major blow for Iran and set back the deterrent advantage gained by a string of Revolutionary Guards sabotage attacks on Gulf oil targets and the US in Iraq since May 12. Tehran will not allow this extreme affront to go unanswered.

DEBKAfile’s military sources note that the capture of the tanker at Gibraltar blocked the Mediterranean route for dodging US sanctions on Iranian oil exports. US intelligence tracked the Grace 1 from its port of origin in Iran in mid-June and watched the vessel circumnavigating Africa instead of sailing through the Red Sea, the Suez Canal and Mediterranean up to its Syrian destination. Now that the Gibraltar gate to the Mediterranean is slammed shut, Iran can only fall back on the Chinese outlet. For now, the Trump administration is turning a blind eye to the oil tankers moving Iranian oil freights to terminals in China.
Mohsen Rezai, a former IRGC commander, is described by our sources as enjoying the rare advantage of high prestige in regime circles and wide popularity on the Iranian street. His voice is relatively moderate and measured compared with his hardline colleagues. The threat to seize a British oil tanker or other vessel coming from him should be taken seriously.