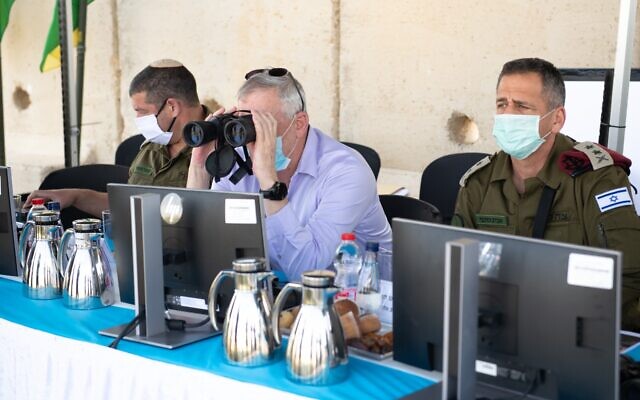 On a visit to the North, Defense Minister Benny Gantz warned on Monday, “If Hizballah attacks Israel, Lebanon will in the end pay the price, and we’re prepared for a moment that I hope will not come.” The exercise “Deadly Arrow” simulates a war with Hizballah in which Israeli forces break through to southern Lebanon to win the day.

The local Daily Star reported that Hizballah had acted “as a precaution in case the drill was a ploy to launch a limited attack” on its border strongholds.

Gantz went on to comment more optimistically “I also hear positive voices in Lebanon that are even talking about peace with Israel, who are implementing processes with us like shaping the maritime border,” he said, referring to the US-brokered talks for resolving the dispute over the sea border which that runs through rich energy deposits.

Lebanese national media reported that as the IDF exercise got underway, low-altitude overflights were sighted over the southern towns of Hasbaya, Arqoub, Jabal al-Sheikh, Marjayoun, Keserwan and Metn, and reconnaissance drones appeared over Jezzine.

Lebanon remains at war with Israel. Still, President Michel Aoun’s daughter, Claudine, said this week that she supported the idea of peace with Israel provided that “all problems are solved” – some pretty stiff, like all the borders and “the Palestinian refugees.”

Since July, Israel’s northern front has been on a state of preparedness after Hizballah vowed to avenge the death of one of its fighters in an Israeli air strike over Syria. Hizballah, a powerful political force in Beirut, belongs to the Iranian-led “resistance front” which is committed to Israel’s destruction. It is backed by a vast arsenal of some 150,000 missiles largely interred underground.

This week, two covert Iranian nuclear arms development sites were revealed by opposition leaders in Washington. They too operate largely underground, like most of Iran’s important military facilities.