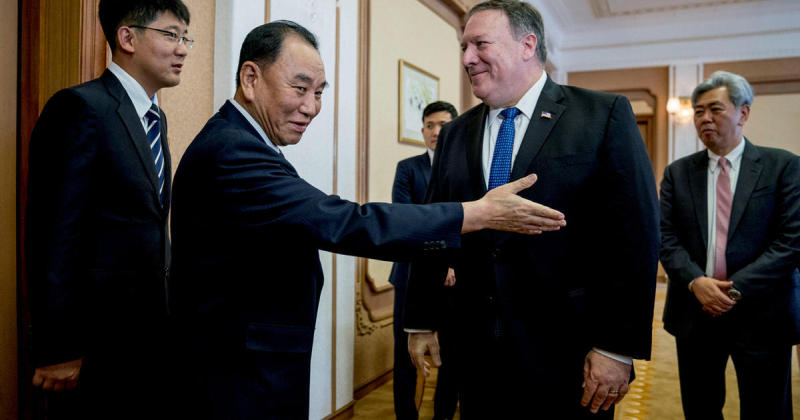 A breakthrough – or the lack of one – on the road to North Korea’s nuclear disarmament is critical to the personal future of President Donald Trump and his Secretary of State Mike Pompeo. It also has wider repercussions for the prospects of the White House strategy for bringing Iran to heel.

Pompeo, when he faced North Korean Foreign Minister Kim Yong Choi in Pyongyang last week, did not get the denuclearization negotiations off to a productive start, although Trump shot off an optimistic tweet: “I have confidence that Kim Kong un will honor the contract we signed & more importantly, our handshake. We agreed to the denuclearization of North Korea,” he said. “China, on the other hand, may be exerting negative pressure on a deal because of our posture on Chinese Trade. Hope not.”

Whether or not China put its oar in, Pompeo found himself facing the implacably tough face of the Kim regime, against which Donald Trump had been widely cautioned before his June 10 summit with Kim Jong-un. DEBKA Weekly’s sources note that, while Kim Yong Chol did not repudiate his boss’s commitment to Trump to dismantle his nuclear arms, he dug his heels in against discussing any issue before hearing how the US planned to deliver on Trump’s commitments to Kim. The North Korean wanted hard facts on tangible US steps for buttressing the Pyongyang regime and making North Korea prosperous.

Pompeo, for his part. held out for the North Koreans to produce a detailed catalogue of the facilities and research centers involved in the development of their nuclear weapon and ballistic missile programs. On this, he drew a blank. The encounter ended up in deadlock with each side demanding of the other in effect: “You go first.”

At that point, the US Secretary got up and left.

The trouble was that both teams turned up for their first round of nuclear negotiations locked into rigid negotiating tactics, instead of setting out a shared starting point from which to go forward. Seen from the American side of the table, the North Koreans appeared unwilling to give any sign of their intention to denuclearize, whereas the North Koreans saw the Americans denying all promise of the slightest economic benefit. And indeed, they keep hearing the administration harping on its determination to keep tough sanctions in place. The first round of talks therefore failed to produce a single point from which to begin building trust between the two parties or a basis for moving on to a second round.

The question of who blinks first is as pointless as expecting the Trump administration to offer confidence-building economic gestures. What is needed is an event that can act as the catalyst for reviving diplomatic traction. Since another Trump-Kim summit would only reach the same impasse, a third party must step in to pull the cart out of the mud, whether it is China or South Korea. Xi Jinping is out of the running due to the US-Chinese trade war, which leaves South Korea’s Moon Jae-in as the most suitable broker.

On July 27, the two Koreas celebrate the 63rd anniversary of the armistice agreements that ended their war. This would be a good occasion for Kim and Moon to sign an agreement for ending the war. They could honor Donald Trump for his great vision of peace at the Singapore summit with Kim, which they were consummating. He could reciprocate by easing some of the US sanctions against North Korea or making the Kim regime a generous gift. Very little time remains to choregraph an event of this kind. Meanwhile, the repercussions from the fruitless Pyongyang encounter touched on Trump’s discussions with America’s NATO allies this week and will color his face-to-face with Vladimir Putin in Helsinki on July 16. It will certainly have a ripple effect on Trump’s sanctions policy towards Iran.