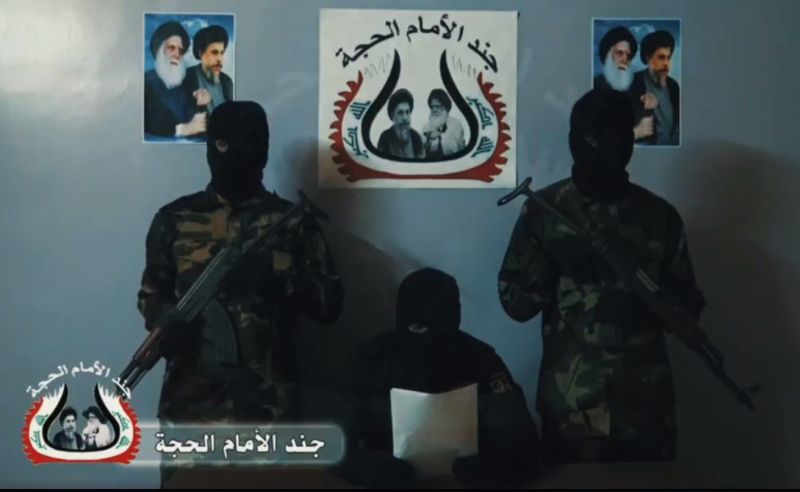 The Iran-backed campaign by Iraqi Shiite extremists to drive US forces from Iraq substantially pre-dates Israel’s attacks on Popular Mobilization Forces (PMU)’s bases and Iranian missile stores earlier this month. On Tuesday, Aug. 27, a video published on social media featured a group of armed, masked men promising “to attack every single US civil and military base in Iraq if Trump does not withdraw them.” They said “The US troops are invaders and we will not rest until we expel them.”

The group calling itself “Jund al-Imam al-Hujja” claims to follow the “strategy” of the late Ayatollah Muhammed Mohammed Sadiq al-Sar, grandfather of the Shiite cleric Muqtada Sadr, who today heads the largest predominantly Shiite bloc in Iraq’s parliament. His Saraya al-Salam militia, currently part of the PMU (Hashd al-Shaab in Arabic) battled US forces in the years after their 2003 invasion of Iraq.

The new video was the first public domestic manifestation of armed PMU forces preparing to strike US forces in Iraq in the wake of the Israeli attacks.

To counteract the threat, US Secretary of State Mike Pompeo and his advisers on Iraq are cobbling together a policy that will hold off attacks on the 5,000-strong US forces in Iraq, while at the same time stopping the flow of Iranian arms into and through Iraq and Tehran’s use of PMU bases as way stations for its arms buildup in Syria and Lebanon.

In a sign of the changing times, Pompeo has asked for help from that same truculent Muqtada Sadr, who is now fiercely fighting Iranian influence in Baghdad. US emissaries approached him on the quiet with a three-point request.

1. To convince the Baghdad government to demand that Tehran and its Revolutionary Guards Corps remove their missiles from Iraq and promise to discontinue their deployment in the country.

3. To call on the Sadrists in parliament and factions affiliated with the PMU to immediately pull their officers and men out of Syria and return home. The US diplomats intimated that if the PMU complied with this request, Washington would prevail on Israel to call off its attacks on their Iraq bases. Our sources note that compliance with this request would scupper Iran’s arms transport network via Iraq to Syria and Lebanon.

Our sources add that the US initiative hopes to profit from the quarrels in the PMU leadership revealed by intelligence sources about its next moves. The most fervent Iran loyalists accused Israel and blamed the US for letting the Israelis loose, while other voices advocated practical steps for avoiding friction with the US and its military forces in Iraq.

The PMU leader Faih Al-Fayyad took the latter view. One of his supporters, Zahir Al-Abadi, said on Tuesday, Aug. 27 that the leader was working on “centralizing” decisions inside the PMU. However, the militia umbrella is meanwhile on the move. In a secret nocturnal operation under cover of dark, the group has begun removing its weapons depots out of harm’s way to secret locations. A small group of trusted members is overseeing the operation to guard against the “spies and intelligence agencies” inside the ranks.

Up until now, 10 depots have been emptied out in Baghdad, Diyala and Salahuddn provinces, in compliance with Iraqi Prime Minister Adel Abdel-Mahdi’s injunction to remove these weapons stores out of population centers. The US, for its part, has declared its respect for “Iraqi sovereignty” and objection to “potential actions by external actors.” A Pentagon statement underlines the fact that the American troops are in Iraq at the “invitation of the Iraqi government and in compliance with all its laws and directives.”

These steps – and the intentions behind them – have substantially reduced the peril to US forces in Iraq, that may have resulted from Israel’s purported attacks on the bases holding Iranian arms.