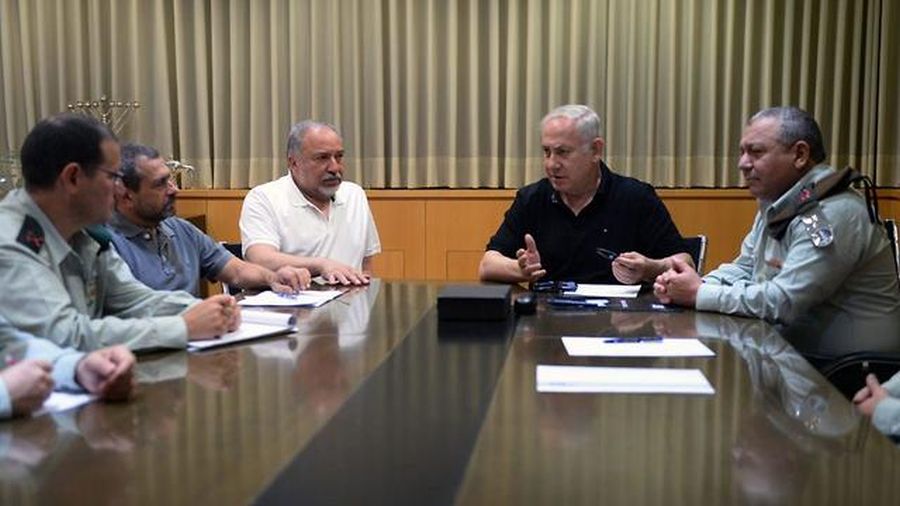 Israel came out of its “wide-scale” operation against Hamas terror on Friday night, July 20, leaving Hamas holding the initiative for the next round of violence. The IDF operation was almost as phony as the Gaza “ceasefire.” Prime Minister Binyamin Netanyahu, Defense Minister Avigdor Lieberman and IDF Chief of Staff Lt. Gen. Gady Eisenkott staged a ritual by now all too familiar: The flames of war were quenched in Gaza and on the northern front by a two-prong military-cum-diplomatic intervention without Israel conducting a large-scale military operation. A day earlier, Lieberman admitted that Israel’s deterrent strength had been seriously eroded by Hamas getting away with more than three months of aggression. He held the government responsible.

On Friday afternoon, Netanyahu talked by phone to President Vladimir Putin. The subject of their conversation was not revealed. However, the prime minister’s office issued a statement affirming that he would continue to act against the establishment of an Iranian presence in Syria.

Lieberman was meanwhile on the phone to his Russian counterpart, Gen. Sergei Shoigu, following which Ambassador Alexander Shein in Tel Aviv announced that he was confirming as authentic the reports of an Russian-Israel accord to ensure the withdrawal of Iranian and Hizballah forces from Israel’s border.

After that verbal round came a spate of Russian backtracks. Ambassador to Baghdad Maksim Maksimov stated that Iranian forces would not quit Syria because, like the Russian army, they were there legitimately at the invitation of the Damascus government. He stressed that so long as Russian troops remained in Syria, so too would Iranian forces. Russian ambassador to Damascus Alexander Kimshchank came forward on Thursday to assert: “There are no pro-Iranian armed units in the south of Syria,” adding, “This issue has already been settled.”

Russia diplomats caught in a web of self-contradiction are less of a problem than the arrival of Hizballah and Shiite militias under the command of Iranian Revolutionary Guards officers to points just 2-3km from Israel’s Golan border. Their presence catches the Netanyahu government in contradiction of its frequent vows to prevent any Iranian or pro-Iranian forces from getting established in Syria, least of all on Israel’s border.
DEBKAfile’s military sources report that because Tehran has escaped scot-free in Syria, Israel found its hands tied on the Gaza front against Hamas. On Friday, Netanyahu and Lieberman decided to accept Putin’s guarantees to keep Iranian forces at a distance from Israel’s borders – despite his repeated default on former guarantees. But no more than five hours elapsed before Hamas turned the Gaza flame high with a deadly cross-border attack on Israel border forces. For the first time in more than three months of explosive balloon and flaming kite attacks and violent border assaults, Hamas surprised Israel by deploying trained marksmen against Israeli troops and killing one soldier.  The furious IDF tank and air force reprisal on 8 Hamas outposts killed 4 Palestinians and injured more than 100.
While getting set for the next round of a wide-ranging IDF counter-terror offensive in Gaza, the diplomatic wheels began turning. Egyptian General Intelligence Director Gen. Kemal Abbas and the UN Middle East envoy, Nikolai Maldanov were enlisted to the effort.

The Israeli public were told (a) that Israel fighter jets had conducted three large-scale sorties against Hamas targets in the Gaza Strip Friday evening, as the prologue for a major ground operation, and (b) that Israel had asked Egypt to broker a ceasefire.

In fact, the Israeli jets dropped no more than 6 missiles on each Hamas command center attacked. Although they were said to have been flattened, they were damaged but remained standing.
After a quiet night on the Gaza front, Hamas offered Israel a dose of reality. On Saturday morning the terrorist group’s spokesmen commented that the ceasefire was very fragile and liable to break down at any moment. Furthermore, in none of the negotiations were the balloon-cum-kite offensive or the Palestinian border riots addressed and would therefore continue. Hamas had achieved exactly what it sought: the freedom to carry on as before, call the shots on when to goad the IDF into reprisals and to calibrate the level of escalation centering on the Gaza Strip.
After witnessing Israel’s handling of security threats on those two fronts, Hamas, Iran and Hizballah will feel free to continue to erode the IDF’s deterrence and self-confidence, while landing a fresh blow or setback on Israel’s head whenever they choose. Netanyahu-Putin phone calls will not change this skewed symmetry.

42 thoughts on “How Russia wangled Israel into phony Gaza “ceasefire,” and acceptance of Iranian/Hizballah in the north”