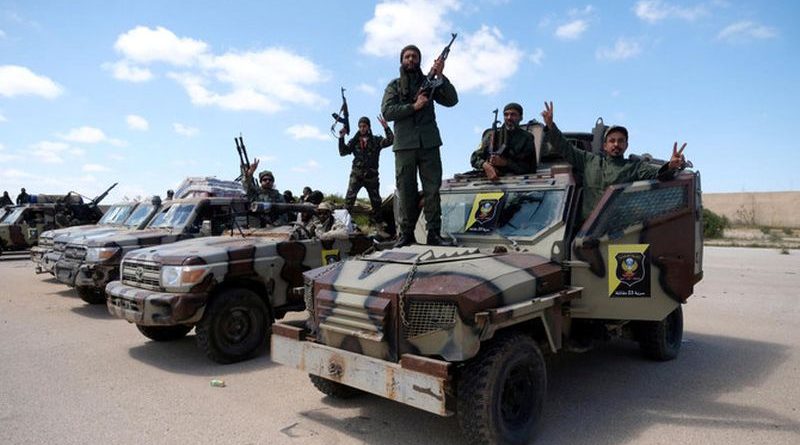 Russia has just airlifted into Libya the 350-strong Syrian rebel “Fifth Legion,” once linked to Israel, to combat a second Syrian rebel unit, this one deployed by Turkey, in the battle for Tripoli. The two rival airlifts are pumping reinforcements into opposing sides of the battle. The Syrian rebel outfit deployed by Moscow bolsters the drive of Gen. Khalifa Haftar’s LNA to capture the Libyan capital.  Turkey is boosting the GNA, fielded by the UN-recognized Tripoli government of Fayez al-Sarraj, in order to keep Haftar’s army at bay.

The Syrian “Fifth Legion” commanded by Abu Jaafar joins Russia’s mercenaries under contract with Wagner, who are already fighting there. Haftar is also backed by France and air support from the UAE and Egypt. Sarraj’s army is backed by Italy and Turkey with the latter mounting drone strikes against the enemy.

The battle has swung back and forth without resolution since April 2019 when  Haftar, who rules eastern Libya from Benghazi in alliance with the Libyan House of Representatives, launched his campaign to capture Tripoli. Meanwhile, the oil-rich African country sinks every deeper into poverty.

Repeated UN attempts to reach a ceasefire and arms embargo have failed. On March 17, the world body and nine countries called on Libya’s warring parties to cease hostilities, which also targeted medical facilities, and allow health authorities to combat the new coronavirus. Libyan authorities admit to more than 20 confirmed cases of coronavirus, but this figure may be way off track due to the small number of tests.

The battle for Tripoli shows no sign of abating. It may also escalate as meanwhile a corner of the Syrian war is imported into Libya.