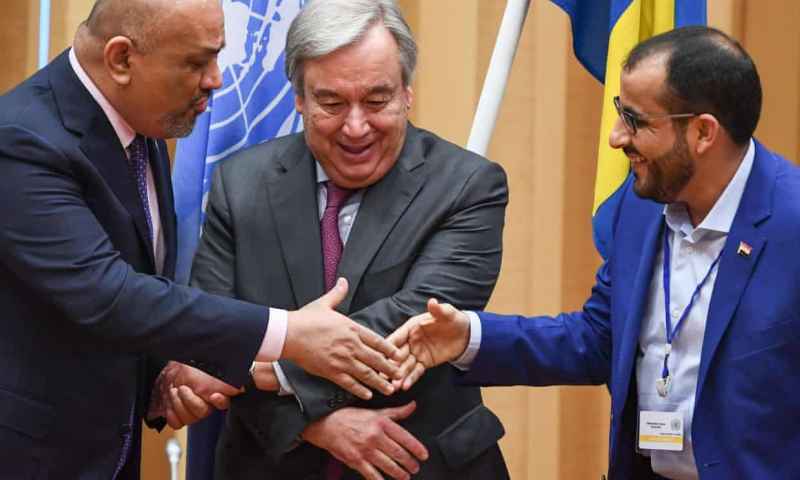 Confidence-building steps were needed to bring Yemen’s warring sides to a castle in Rimbo, Sweden, on Dec. 10 for face-to-face talks after three years of vicious warfare and a fast-growing humanitarian catastrophe. UN officials shuttled between the delegations of President Abd-Rabbu Mansur Hadi’s government and the Iranian-backed Houthi insurgents, after procuring their agreement to swap up to 6,000 prisoners in the coming months. The Houthis are expected to release high-ranking Yemen army commanders, including the former defense minister Gen. Mahmoud Al Subaihi and relatives of President Hadi.

This round of talks ended in agreement on a ceasefire for the Red Sea port city of Hudaydah and its governorate, hailed by UN secretary general Antonio Gutteres on Thursday, Dec. 13 as a major breakthrough. He said the agreement included the deployment of UN-supervised neutral forces and the establishment of humanitarian corridors. Troops from both sides will withdraw from the area. A political framework will be discussed in a next round of meetings, scheduled for January.

Otherwise, the talks were bedeviled by wrangling over control of the international airport in the rebel-held capital of Sanaa. The Houthis laid down tough conditions. They stipulated that the Saudi-UAE-led coalition must first lift its air blockade over this and other Yemen airfields and reopen them to regular traffic. They were obviously afer clearing the runways for Iranian transport planes to land in Sanaa with fresh supplies of arms and military equipment. The Houthis sought the same freedom as Iranian arms planes enjoy at Beirut international airport as a ploy for legalizing Tehran’s arms shipments.

The government delegation, after consultations with Riyadh, came back with two compromise proposals. One was to establish a Yemeni government security mechanism to inspect the aircraft flying into Sanaa before their freights are unloaded. When the rebel leaders turned this down, the government delegation proposed subjecting flights to Sanaa to prior inspections at Aden or Sayun, both government-controlled locations. This too was thrown out by the Houthis, who countered with two optional plans:

1. Granting Sanaa international airport the same status as Beirut. This Lebanese international airport is ruled on paper by the Lebanese government, but in practice by Hizballah, which dictates the airport’s security arrangements and maintains troops on the main roads leading to the airport. The Yemeni Houthis seek the same status in Sanaa airport as the Lebanese Hizballah have in Beirut.

2. Alternatively, the Iranian-backed insurgents proposed (a) Greater leeway for Iranian weapons shipments in the region; and (b) Landing Iranian commercial aircraft bound for Sanaa at Amman airport for inspections. They knew that Israel would put its foot down against this plan. Alternatively, the Iranian aircraft would fly to Amman through Saudi air space, an idea which Riyadh would never accept. These proposals were designed less to resolve issues than as ploys to embarrass Iran’s enemies.