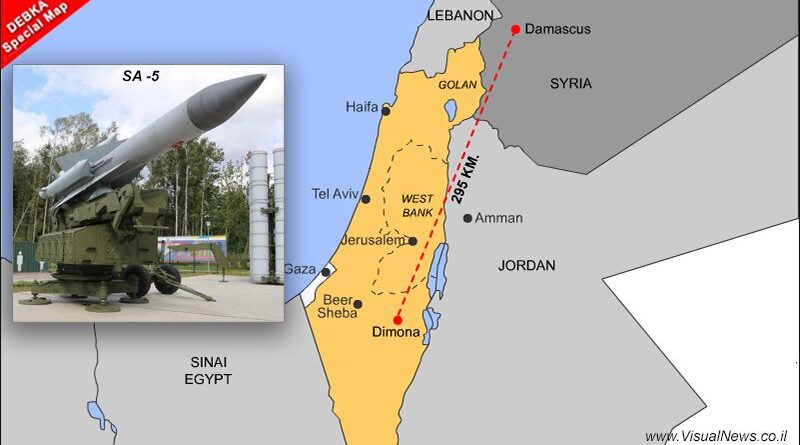 A preliminary military probe found that Israel’s air defenses failed to intercept a Syrian surface-to-air missile heading towards the Dimona nuclear center on Thursday, April 22. Confirming this, the IDF spokesman reported that the intruding missile reached the skies of southern Israel before breaking up near the Dimona nuclear center. This statement shed some light on the questions arising from the massive explosions that rocked the country during the night across the Negev and as far as Jerusalem and central Israel.

According to an earlier unconvincing account by a military official, fragments of a Syrian air defense missile “strayed” into Israel’s air space during a counter-attack on Israeli air raiders over Damascus suburbs.

This incident recalled a similar, albeit rare, episode on December 25, 2018, when mysterious explosions rocked the central Israel towns of Zichron Yaakov, Caesarea and Hadera north of Tel Aviv, only to be told that it was caused by a failed interception by the David’s Sling anti-missile system of a Syrian SA-5 missile that strayed while targeting Israeli jets over Damascus. That the likely target was Israel’s main power station in Hadera was not mentioned.

Officials in Tehran and Damascus will meanwhile no doubt celebrate what must be considered their notable tactical feat in overcoming Israel’s famous anti-missile missile shield.

Siren alerts and strong explosions in the Dimona region of southern Israel were caused by a Syrian SA-5 surface-to-air missile landed near Israel’s nuclear center before dawn on Thursday, April 22,, the IDF spokesman reported. Fragments were found on empty ground at Kfar Negev near Dimona. No damage or casualties are reported. The Israeli air force responded by targeting the same air defense battery and others in the Damascus region. This was the second IDF attack reported by Syria Thursday night. The first targeted pro-Iranian targets. Damascus reported that those missiles cam from the Golan and injured four soldiers.

The Dimona incident, DEBKAfile’s military sources report, is fraught with unexplained features: How did an SA-5 air defense missile fired from a point south of Damascus reached the Dimona region when its outside range is 300km? How to account for the powerful explosions that rocket not only the Bedouin villages outside the nuclear center, but woke people up as far as Kfar Yeruham, Jerusalem and Modiin?  The military spokesman, after examining these questions, ruled out missile fire from the Gaza Strip, but allowed that some of the mystery explosions may have been caused by Israel’s own air defense missiles in action against the intruder. The IDF continues to investigate the incident.