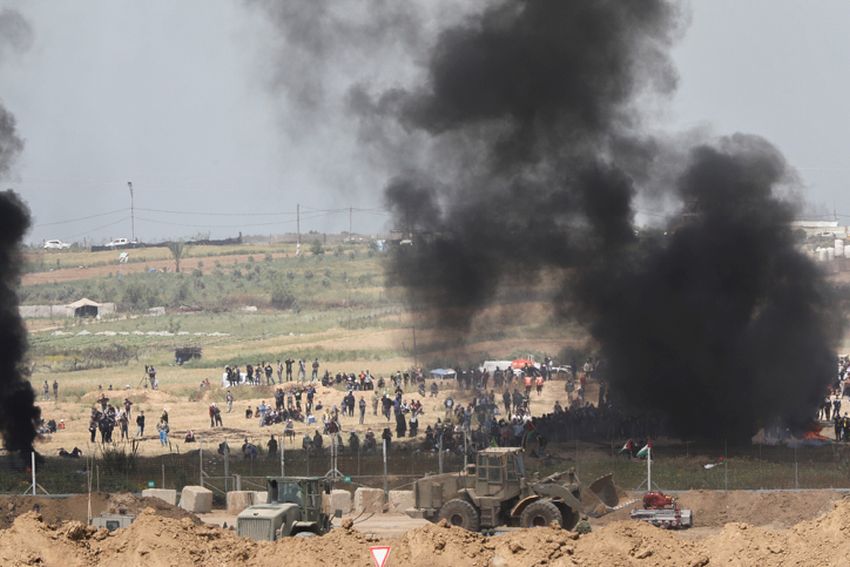 Reporters on the scene attested to the protest turnout for Hamas’ second March for Return on Friday, April 6, being about one-third of last week’s figure – 15-20,000 at most. Neither is the Palestinian casualty figures of 9 dead, and 1,000 injured, including 293 from Israeli fire, confirmed, as being the result of IDF tear gas and live fire. The IDF succeeded in stopping armed Palestinians from breaking through the border fence, while coming under eight attacks from explosive devices lobbed over the fence.

The Palestinians presented those made-up figures in their second try Friday night for a UN Security Council condemnation of Israel and the creation of a commission of inquiry. The US stepped in to defeat the move.
The impression gained from reliable sources watching the events in the Gaza Strip was that Hamas fell flat in its bid to build on Friday’s momentum for a large crowd of demonstrators, and compensated by inflating all the figures. Furthermore, the tactic of setting thousands of tires on fire for black smoke to screen violent actors from IDF snipers fizzled, as did the plan to use mirrors to dazzle the shooters. If those tactics worked, how come there were so many Palestinian casualties?
The Palestinian extremist group’s second attempt to use a “peaceful demonstration” as cover for knocking over the border wall and “marching all the way to Al Aqsa” may be seen as a partial flop. But only thus far. The IDF’s successful score this time round is qualified. Hamas has not given up on its six-week campaign up to mid-May or even asked for a truce. The IDF is being forced to maintain heavily reinforced strength on the Gaza border and hold to a defensive posture, while facing constant assault by Hamas. The troops must stay out of harm’s way while avoiding retaliating for Hamas provocations so as to avoid inflicting casualties on civilian demonstrators. The question asked by DEBKAfile’s military sources is this: Why does Israel put up with this untenable situation? Why don’t the troops cross into the Gaza Strip and, at the very least, pull down the tent encampments Hamas has set up for mass protesters to cover its terrorist assaults? Why is the Israeli military held back from preempting those assaults while still in preparation, or striking deep at sensitive Hamas military targets? Must the IDF stand guard on the border until mid-May without grabbing the initiative from these Palestinian extremists?
Israel’s military chiefs may be trying to tell Hamas that if it holds back from striking inside Israel, the IDF will respect the same rule with regard to the Gaza Strip. However, the message getting across to the rulers of Gaza is that they can carry on with their campaign of violent pressure on the border, in the certainty that the IDF will not initiate any action to stop it. The Israeli military must therefore take action to correct this impression before the Gaza border duel gets out of hand.