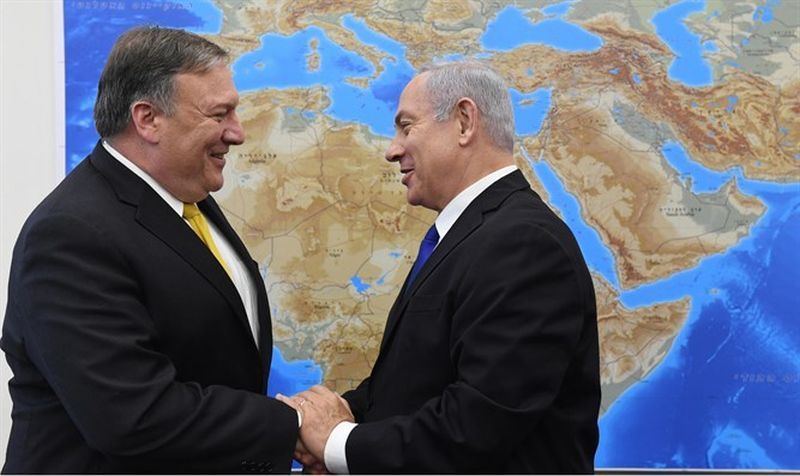 As US Secretary of State Mike Pompeo warned at the UN on Tuesday, Aug. 20 – that the countdown had started for ending the arms embargo on Iran – a blast thundered through an arms depot belonging to Iran-backed paramilitaries in northern Baghdad. This explosion, which underlined Pompeo’s warning, was the fourth in a series of mysterious attacks in recent weeks on bases and depots used by Shiite militia groups affiliated with the Popular Mobilization Forces (PMU). This umbrella group’s commander Mahdi al-Muhandis is the Iraqi deputy of Gen. Qassem Soleimani, head of the Al Qods Brigades which is responsible for Iran’s overseas clandestine and terrorist operations.

It was not by chance, therefore, that the State Department on that day also released what Pompeo called a “CountdownToTerror Clock” for tracking the 15 months remaining to the expiry of the arms embargo on Iran and travel ban on Soleimani. The embargo was put in place by the UN and set to be lifted five years after the nuclear accord’s adoption in 2015.

The Baghdad attack was directly related to Soleimani. It was at his request that a few days earlier Iran had transferred to the Iraq base 50 single stage, sold-fuel, surface-to-surface, road mobile Fateh-110 missiles, equipped with extra boosters for extending its range to 400km.

All 50 were totaled in the explosion.

The Israeli Air Force carried out the first two of the four attacks on Iranian targets in Iraq – but not the second two, DEBKA Weekly’s military and intelligence sources confirm. The Hash Shaab’s 52 Brigade in the Salahudin province northeast of Baghdad was Israel’s first target on July 19; Its second, on July 28, was Camp Ashraf in the Diyala Governorate near the Iranian border.

But the fourth was the work of some unnamed party or parties, as was the third which on Aug. 12 hit the ammo depot serving a number of Shiite militias at Camp Al-Saqr aka Camp Falcon in South Baghdad.

Under their partnership, Washington has imposed sanctions on Iran, while Israel has taken responsibility for military operations in support of the Trump administration’s “maximum pressure” campaign against Tehran.

This division of labor was set out secretly and in detail between Pompeo and Prime Minister Binyamin Netanyahu when the former spent a few days in Israel last April.

The partnership took another step forward on Wednesday, Aug. 21, signaled by a bland, tardy communique from Jerusalem. The US-Israel military drill “Noble Rose” exercise ended on Aug. 14, said the notice. The 13th US Army Special Forces took part in the exercise. The drill was led and commanded on the ground by [the Israel Navy’s] Shayetet 13 and controlled by Joint HQ of US Command. In the exercise, scenarios were practiced for taking over a ship and extracting a force from enemy territory.

That same day, Aug. 21, when the Iranian tanker Grace 1 was released by Gibraltar, a State Department official warned that assisting the Iranian vessel could be interpreted as providing support for a US-designated foreign terrorist organization (FTO). The US has placed the Iranian Revolutionary Guards Corps, which is also connected to the country’s oil exports, on the FTO list. This warning was specifically addressed to the Greek government.

The two statements from Jerusalem and Washington amounted to a message to Tehran and any government giving the tanker assistance, that the Grace 1, once seized by British Marines and brought to Gibraltar, risked being captured again, this time by a team of Israel’s naval commandoes of US special forces.

The warning was instantly heeded by Greece. Deputy Foreign Minister Miltiadis Varvitsiotis announced that the Iranian tanker would not be permitted to dock at Kalama; neither would its passage to Syria be facilitated.