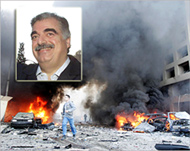 The US welcomed the conviction by a UN-backed court on Tuesday, Aug. 19 of a Hezbollah member for the 15-year old assassination of former Lebanese Prime Minister Rafik Hariri in a massive bombing. Secretary of State Mike Pompeo slammed Hizballah’s “exploitation’ of the financial system of Lebanon, which is reeling from the aftermath of the huge Aug. 4 explosion,” and said “the degradation of Lebanese institutions jeopardized the country’s financial well-being and potential recovery.”

The UN-backed Special Tribunal for Lebanon found Salim Ayyash, one of four accused Hizballah members, guilty of the murder of PM Rafiq Hariri by a huge bomb explosion that shook Beirut on Feb. 14, 2005, and killed 21 people. Ayyash’s three accomplices were cleared for lack of evidence. The four were tried in absentia since Hizballah refused to reveal their whereabouts.

The victim’s son, former prime minister Saad Hariri. called for “just punishment” for the criminals, and the mastermind be turned in.

The Tribunal (STL) was “satisfied beyond a reasonable doubt” that Ayyash used a mobile phone that was critical in the attack. Presiding Judge David Re said the evidence was largely based on mobile phone network data used by the suspects for  tracking Hariri’s movements in the months leading up to the attack, and the phones going “dark” after the blast.

“The tribunal has found beyond a reasonable doubt that a suicide bomber triggered the blast,” said Re in reading out the verdict.

Four different networks of mobile phones “were interconnected and coordinated with each other and operated as covert networks at the relevant times”.

The court found the killing was politically motivated in an “act of terrorism designed to cause fear in the Lebanese population.”

The crime did in fact plunge the country in a fever of sectarian strife, No one believed that Hizballah carried out the attack on its own initiative. Now, too, the verdict will add fuel to the anti-Hizballah sentiment rising again in Lebanon since a massive blast at Beirut Port killed 170 people and injured 6,000, amid an economic meltdown, political crisis and outbreak of coronavirus. Many Lebanese were again blaming the pro-Iranian movement as the strongest power in the land for the disaster and are calling for an international inquiry now too as then.