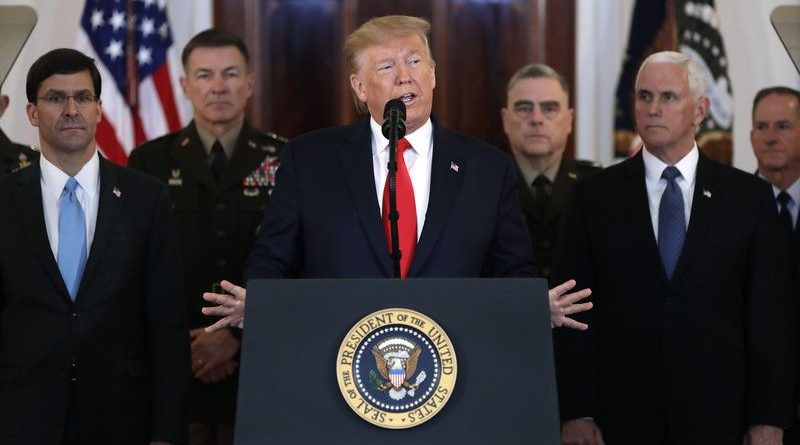 US President Donald Trump noted on Wednesday, Jan. 8 that Iran’s missile attacks that morning on two US bases in Iraq caused no loss of American or Iraqi life and minimal damage. “Iran appears to be standing down,” he said in an address to the nation. If Iran changes its behavior and abandons terrorism and destruction, of which Qassem Soleimani was the architect, “we will evaluate our options,” he said. Tehran must understand that a deal will make the world a better place and bring prosperity to Iran itself. “We must all work for a better deal with Iran,” he said. Meanwhile, Trump announced new economic sanctions on the Islamic Republic and reiterated, “We will never let Iran acquire a nuclear weapon.

US military sources noted that while Iran for the first time attacked US military targets with ballistic missiles, a third failed and significant facilities were missed.

DEBKAfile reported earlier on Jan. 8: The US Ain al-Assad air base in W. Iraq and a US facility at Irbil, capital of the Kurdish republic, were hit by 15 missiles early Wednesday, Jan. 8, Tehran announced. Sources linked to Iran’s Revolutionary Guards said that these attacks were part of a series still to come in revenge for the killing of Gen. Qassem Soleimaini. The source of the attack was not immediately clear – whether it came from Iran or a local Shiite militia. And although extent of the damage and casualties was equally unclear, the attack definitely notched up the friction prevailing between Tehran and the US over the killing of the powerful Al Qods general last Friday.

After urgent consultations at the White House and the Pentagon on how to handle this latest attack, President Donald Trump made this comment on Twitter: “All is well! Missiles launched from Iran at two military bases located in Iraq. Assessment of casualties & damage taking place now. So far, so good! We have the most powerful and well-equipped military anywhere in the world by far! I will be making a statement tomorrow morning.”

DEBKAfile’s military sources: The missile strikes on the two US bases occurred shortly after the Soleimani funeral ended. It was in line with the revenge attacks that Iran has threatened to launch against the US military in Iraq and across the Middle East. US military facilities were already on the ready. On Tuesday, top war preparedness was declared at all US facilities in the region and by the armies of America’s allies, including Israel, Saudi Arabia and the United Arab Emirates. The statement issued by Israel’ security cabinet on Monday, that Israel is not involved in the heightened tension between America and Iran following the killing of Qassem Soleimani, was simply an attempt to calm public concerns.