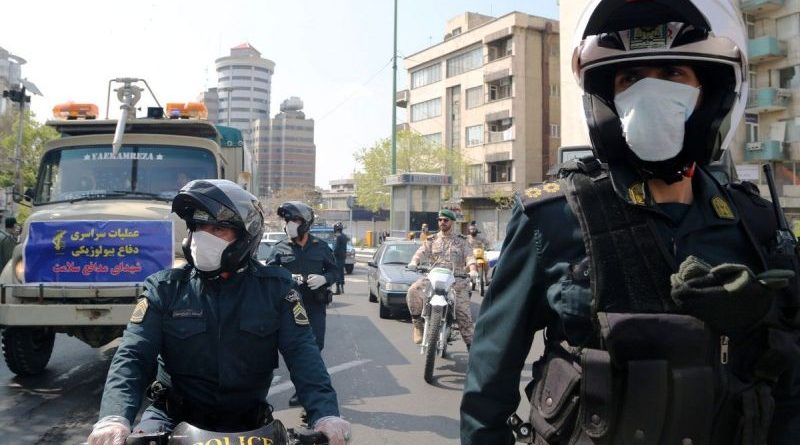 Tehran is fudging the figures, Damascus is in denial, Lebanon is looking to Hizballah for help; Iraq is getting help from China, and Afghanistan is swamped with the largest cross-border repatriate migration ever from plague-ridden Iran.

These countries have limited or no capacity for testing and tallying the scale of the coronavirus pandemic or the medical facilities to cope with it. Anyway, Iranian officials and their militias continue to crisscross their borders on Islamic regime business.

US sanctions have been accused of hobbling Tehran’s capacity to contend with the virus plague, which by April 1 had accounted for 3,000 deaths and 64,000 confirmed cases.

Secretary of State Mike Pompeo defended the administration’s penalty policy on Tuesday, March 30. He stressed that the sanctions do not apply to humanitarian and medical supplies. However, according to Human Rights Watch, “broad restrictions on financial transactions… have drastically constrained the ability of Iranian entities to finance humanitarian imports, including vital medicines and medical equipment.”

The UN secretary general has moreover repeatedly called on Washington to ease economic penalties on Tehran for combating the virus.

Speaking to reporters on Tuesday, Pompeo did not rule out the possibility of lifting some sanctions on Iran and granting waivers to other nations to help fight the pandemic. “Would we ever rethink? – Of course,” he said.

the International Monetary Fund for $5bn in emergency aid to battle the virus.

Any such aid will be too late to save Iran’s neighbors, especially Afghanistan. Close to 200,000 Afghans have fled across the border from Iran bringing an unknown scale of infection with them. Some are laborers; others recruited by Iran for the Shiite militias that fought for Assad in the Syrian civil war and who brought their families over.

The government in Kabul warned this week that the refugees scattering across the country could bring uncontrolled infection to many millions of people and cause tens of thousands of deaths. The official figure of 174 confirmed Afghan cases is not taken seriously by the World Health Organization, any more than the figures of Iran’s other neighbors.

Iraq is trying to get a grip on the crisis. A countrywide lockdown was enforced up until April 11, after 728 cases and 52 deaths from the respiratory disease were officially confirmed. The real figures are believed to be much higher but could not be established without broad tests in the population of 40 million. Therefore, in response to an appeal from Iraq, a new covid-19 testing lab built by Chinese experts was inaugurated in Baghdad on March 25. with equipment donated by Beijing to provide the missing testing facilities.

Iraqis are among the dozens of Shiite militiamen deployed to Syria to fight for the Assad regime under the command of Iran’s Revolutionary Guards officers. Although the forces posted near government military positions in the northern Idlib and Aleppo battlefields were ordered to observe quarantine conditions, militiamen of Kataib Hadrat Zaynab, Kataib al-Imam Hossein and Liwa al-Imam al-Rida staged religious ceremonies and sports events in the last two weeks.

Syria’s Assad regime itself spent two months in denial until on March 17, Damascus finally admitted to the presence of coronavirus in the country. While its propagandists turned the virus into a rallying call for domestic and international support, Damascus continued to mess with the facts. On March 30, its health ministry reported 10 cases and 2 deaths, whereas four days earlier, doctors reported 50 deaths of the coronavirus at a single Damascus hospital

The Lebanese Hizballah alone appears to have come around to confronting the deadly plague, after initially keeping the truth dark in obedience, like Syria, to Tehran’s orders. In Deir ez-Zour in eastern Syria near the Iraqi border, Hizballah has tried to impose restrictions for containing the spread of covid-19. The Shiite group is also trying to control the disease on its home turf, Lebanon. There, no more than 400 cases are officially confirmed, but the disease is believed to be rife, especially in the teeming Shiite community where there may be thousands of unrecorded cases.

The secret finally outed when Hizballah acted to enforce quarantine on the badly hit Shiite towns and villages of southern Lebanon, sending its fighters to enforce isolations and forcibly evacuating suspected carriers to unknown locations. However, Hizballah and Lebanon are badly short of doctors, nurses, hospitals and equipment for beginning to contain the spreading disease and treating the victims it has struck down.