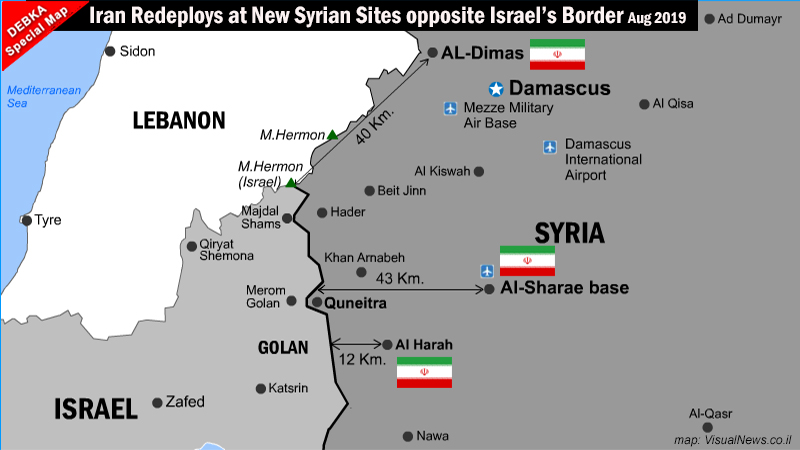 Iran has redeployed UAVs opposite Israel at Al-Dimas near the Syria-Lebanon border, after the Revolutionary Guards Al-Qods Brigades obtained the permission of the Syrian ruler Bashar Assad. It is located west of Damascus and 40km from the Israeli border opposite the IDF’s Mt Hermon positions, DEBKAfile’s military and intelligence sources report. The new UAV post is embedded in a cluster of camps belonging to the Syrian army 4th Division, which is the Republican Guard under the command of the president’s brother Maher Assad.

Our sources report that the Iranians are moving into the small Syrian air base at Al Sharae, just 20km from the Tal Al-Harara hill, which is around 40km from the Israel’s Golan border in the east.

Eight months ago, the Iranian force first stationed at Al-Dimas came under an Israeli air raid. The Al Qods Brigades retaliated by firing a missile into central Israel. There were no casualties and both Tehran and Jerusalem kept quiet about this incident. Then, 10 days ago, Israeli surface missiles destroyed a new observation station just established by Iranian intelligence on Tal Al-Harara. Since this attack, Iranian drones were seen landing and taking off from Al Sharsae air base.

The attached map illustrates the extra efforts Tehran is making to recover its former positions and string them along the full length of the Syria-Israel border.

Reports coming out of Damascus this week meanwhile reveal that the Russians have deactivated the advanced S-400 air defense systems guarding the Syrian military Masyaf weapons research center in the west. Some sources report that Syria is now left only with S-300 systems, against which Israeli warplanes are equipped with effective evasive measures. No explanation is offered for these military movements which are infrequently disclosed by Moscow or Damascus.