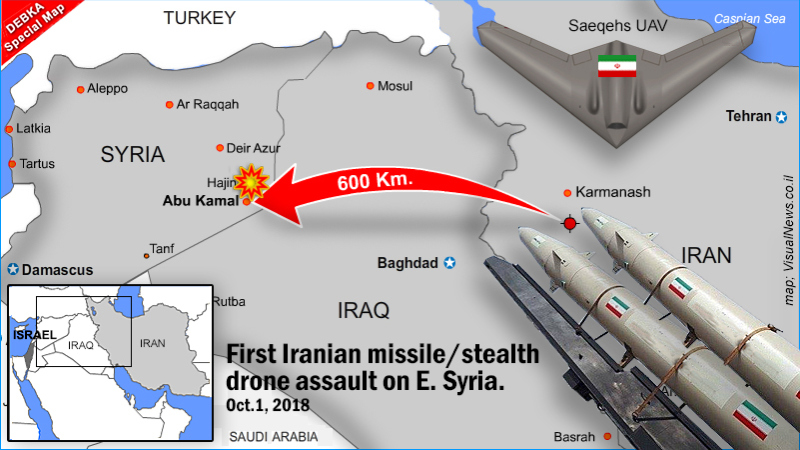 Tehran’s unexpected windfall came with the terrorist attack on a military parade in Ahvaz on Sept 22, which left 30 dead, half of them Revolutionary Guards members. The Syria-based Islamic State was one of the two groups claiming the attack, which gave Tehran an opportunity to scale up its military operations in Syria. Tehran also found encouragement in the slowness of President Donald Trump and Prime Minister Binyamin Netanyahu to match with deeds their dire verbal warnings against its expansionist and violent actions in the Middle East, the Gulf and Red Sea regions.

The official version was that ISIS was being punished for staging the terror attack in Ahvaz. That was only the cover story. Iran’s real intent was a message for its enemies embodied in the slogan painted on one of the missiles: “Death to America, Death to Israel, Death to Al Saud.” Iranian intelligence was perfectly aware that the real perpetrators of the Ahvaz attack were not the Islamic State, but a small Khuzestan separatist group known as the Arab Struggle Movement for the Liberation of Ahvaz, which is supported by UAE intelligence. To back up its cover story, Tehran claimed to have killed 40 ISIS fighters, although it could not have known this.

Western governments were forced by that operation to accept that, although the Iranian air force is still stuck with outdated fighter-bombers compared with the sophisticated US and Israeli warplanes, Tehran has come up with a dangerous substitute, namely, an aerial combat arm of highly advanced stealth drones which are rolling off its assembly lines.

It remains to be seen whether Moscow will allow Tehran to use the extension of the Russian C3 system just installed in Syria. (See a separate article.)

Neither Israel nor the US has thus far countered Iran’s breakthrough to a belligerent presence in Syria’s skies. It is also hard to understand why the Trump administration failed to respond to automatic gun and rocket fire attacks on the US consulate in Basra, southern Iraq, on Sept. 29 by a local Shiite militia under Tehran’s thumb. The facility was shut down and that was all, although Secretary of State Mike Pompeo warned “Iranian-backed militias” that for “incidents of fire,” the United States would respond promptly and appropriately…” He specifically blamed “Iran, its elite Islamic Revolutionary Guards Qods Force and militias under the control of Qassem Soleimani.” So when is this “prompt and appropriate” action to be expected?