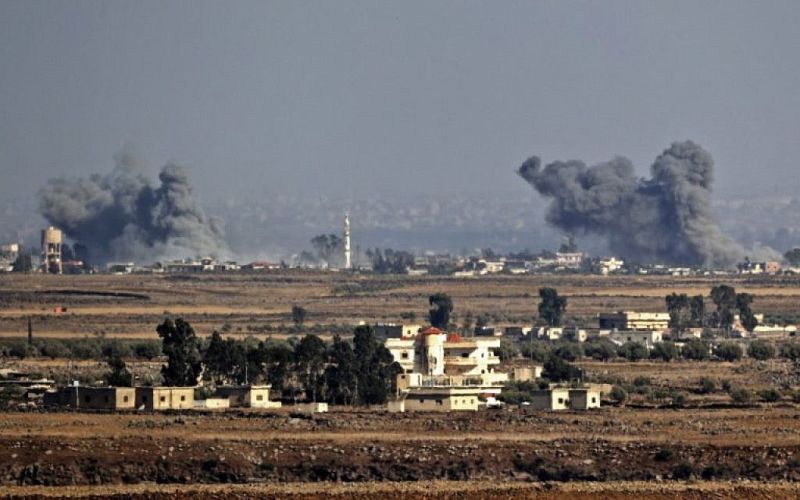 The minor clashes between Israel’s major wars are dubbed by Israel’s armed forces “Military Actions between Wars” – MBWs. The next MBW flare-up is now predicted to occur in the short weeks running up to the April 9 general election.

On Monday, Feb. 11, Israeli drones and tanks struck three sites in the Quneitra region opposite its Golan border. They were identified by Syrian news agency as a former hospital and two Syrian bases in the nearby Jabata Al-Shaab village. The communique did not reveal that all three serve as Iranian al Qods and Hizballah surveillance command centers at a distance of 1-3km from the Israeli border. DEBKA Weekly’s military sources report that the Iranians and Hizballah did not move into those sites recently; they have been there for eight months since the Syrian army, backed by Russian air support, Hizballah and pro-Iranian Shiite militias, recovered the Quneitra region last July.

Israel refrained from interfering with the Syrian operation at the time – although friendly Syrian rebel forces (some backed by the US) were evicted, because Prime Minister Binyamin Netanyahu had been assured by President Vladimir Putin that Iranian forces and their proxies would be kept out of the lands abutting the Israeli and Jordanian borders. He reneged on this promise. The Iranians and their satellites were not stopped from moving in, disguised in the uniforms and IDs of the Syrian army’s 4th Armored Division.

Although Israel’s government and high military command were au fait of this development, they kept quiet – mainly out of reluctance to tangle with Moscow whose cooperation is essential for the IDF to continue its attacks on Iranian targets deep inside Syria. Israel therefore turned a blind eye to the Iranian and Hizballah forces sitting on its northern border, while the Russians ignored Israeli Air Force intrusions of Syrian air space.

But after Sept. 17, 2018, when a Russian IL-20 spy-plane was shot down by Syria during an Israeli air strike, Moscow’s tacit cooperation gave way to annoyance. As recently as Feb. 8, Russia’s Deputy Foreign Minister Sergei Vershinin declared: “With regard to the latest Israeli attacks, we said that such arbitrary attacks on sovereign Syria territory should be stopped and excluded. All strikes destabilize the situation even more. No one should conduct actions in Syria that go beyond the scope of antiterrorist objectives.”

Tehran also decided it was fed up with Israel’s aerial bombardments of its command posts and arms shipments to and through Syria, and reached four decisions:

1. Rapid responses would follow IDF air raids. And so, on Jan. 21, an Israel aerial and missile assault on Al Qods and Hizballah command posts and facilities around Damascus was quickly punished. An Al Qods mobile battery aimed a Fatteh-110 ground-to-ground missile at Mt Hermon while thousands of Israelis were skiing on its snowy slopes. An IDF Iron Dome blew the Iranian missile up in midair.

2. Tehran resolved to take a disrupting hand in Israel’s pre-election campaign, DEBKA Weekly’s intelligence sources report, by inflaming two of Israel’s most active fronts, the Golan and the Gaza Strip.

3. The violence on the two fronts is to be calibrated to escalate as election day nears. Tehran is clearly planning to show the Israeli voter that Prime Minister Binyamin Netanyahu can’t be relied on for the country’s security.

4. Israel would deem the start of Iranian arms shipments to the Lebanese army casus belli. Iranian sources this week claimed that Beirut had declined Tehran’s offer of arms, mainly anti-tank and anti-air missiles, and military instructors, which Foreign Minister Mohammed Javad Zarif put before Hizballah leader Hassan Nasrallah in Beirut. But the offer was repeated in closed-door meetings with Lebanese leaders and their response was not revealed.

Hizballah, which is encamped in Quneitra opposite IDF border positions and in Beit Jinn facing Israeli soldiers deployed on Mt Hermon and Mt Dov, was given the task of launching a terrorist offensive on the Golan and Galilee. They are planning nocturnal raids, cross-border short-range rocket and shooting attacks on villages, highway traffic and IDF armored cars and positions, and planting IEDs with the help of local Golan Druze cells, whose members habitually cross the border. These two Hizballah bases were targeted for an IDF drone and artillery attack on Monday. An upsurge of this sort of violence was predicted in the new Israeli Intelligence Estimate released on Wednesday, Feb.13.

The Palestinian Hamas and Islamic Jihad were assigned with inflaming friction on the Gaza front. They went to work on Sunday night, Feb. 10. The regular Friday mob assault on IDF soldiers defending Israel’s Gaza border began recurring. Night after night this week, thousands of Palestinians attacked Israeli soldiers across the border with automatic gunfire, grenades and bombs. Rocket fire on neighboring Israeli communities is expected to follow.