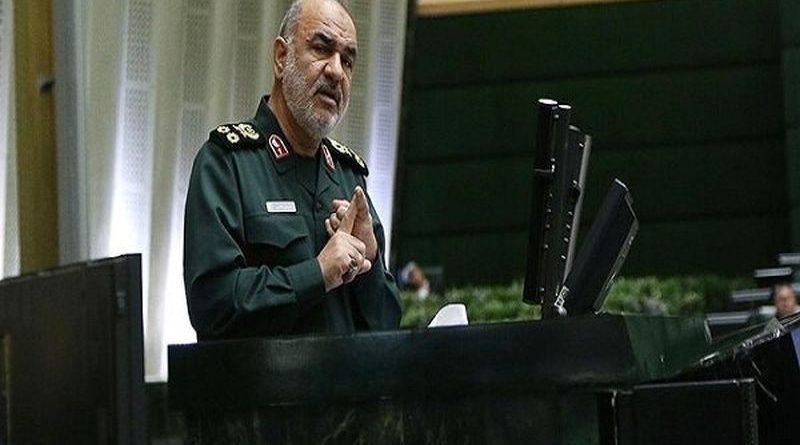 After recovering from the fallout of the Ukrainian jet disaster, Tehran will revert to its plan of assault on US bases across the Middle East, starting in Iraq. That was one of the deductions made by DEBKAfile’s military and intelligence sources from the synchronized threats coming on Sunday, Jan. 12 from Revolutionary Guards chief Maj. Gen. Hossein Salami and Hizballah chief Hassan Nasrallah in Beirut.

Gen. Salami, speaking at a closed session of the Iranian parliament, said: “Our operations against the United States are not over.” Nasrallah: “The response to Soleimani’s killing is not a single operation [the missile attack on two US bases in Iraq] but rather a long course that leads to the ouster of American forces from the region.”
The Hizballah leader, reflecting his Iranian master’s voice, added that the attacks on the US military in Iraq should be taken by Israel as a serious warning of what lies ahead if attacks on Iranian targets continue.
The two Shiite military leaders’ words debunked the sanguine assessments prevailing in America and Israel that by hitting the two US bases, Tehran had closed the account for the killing of al Qods commander Qassem Soleimani. Indeed, bucked up by the Trump administrations non-response to that strike, the Islamic regime is determined to press on. Undeterred by the embarrassment caused by being caught out in a lie over the shooting down of the Ukrainian airliner, killing all 176 people aboard, Iran’s Revolutionary Guards have continued non-stop to pump large quantities of rockets and other weapons systems, such as heavy mortars and equipment for guerrilla warfare, to the Iraqi Shiite militias under their control.

Those militias were ordered until now to hold back from participating in Iran’s latest strikes against the US. This was mistaken for Iranian restraint, when, in fact, our sources report, Tehran is only taking time – two or three weeks at most – to replenish the militias’ stocks of weaponry and prepare the fighting strength for the next, escalating stage of its campaign.

Iran appears to be planning to replicate the Shiite militia campaign conducted 14 years ago which harassed US forces in Iraq on the move in convoys and in bases with IED roadside bombs. Another part of this plan is expected to include rocket strikes against Israel.

Until then, Iran is not desisting entirely from aggressive operations. On Sunday, Jan. 12, the Al-Balad air base, 70km north of Baghdad, which is also used by US forces, took 8 Katyusha rockets. Four Iraqi troops were injured.

99 thoughts on “Iran, Hizballah gird up for guerilla, rocket attacks on US forces in Iraq, rockets against Israel”