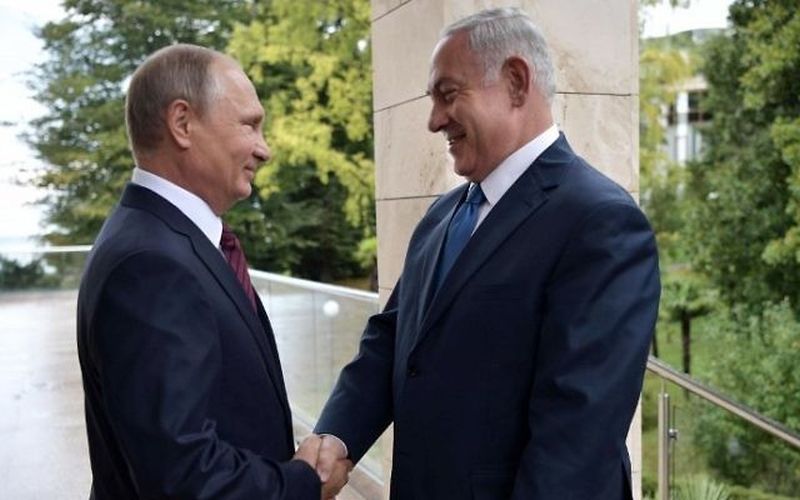 Four days before Israel’s general election, on Sept. 12, Prime Minister Binyamin Netanyahu flew to Sochi to talk with Russian President Vladimir Putin at his summer residence at the Black Sea resort of Sochi. He was taking time out from a ferocious opposition campaign at home to topple him and his Likud party, in order to counter threats from the Iranian-Hizballah front.

Hizballah threatens to hold the Jewish state to account and hold the US and Israel responsible for the Sept. 9 air strike that demolished four Iranian weapons depots at the Al Qods command base near Abu Kamal in eastern at Syria, a key transit town on the Iraqi border. A Hizballah source (speaking as Tehran’s mouthpiece) said in a statement on Tuesday, Sept. 10, that a red line has been crossed. Citing a source inside Syria, he claimed that the targeted site belonged to the Syrian army and had housed its soldiers and their families, and there were no casualties (contradicting reports of 18-20 soldiers killed). The same source also maintained, “The enemy had used Jordanian air space and the Americans assisted them as usual from their military base in the occupied Syria are of Al-Tanf.”

The Hizballah statement ended in a threat: “The aggressors in this region will never be secure. The free peoples will hold them accountable and teach them the lesson they will not forget when attacks are repeated.”

Already resolved on an upsurge of violence for ousting Netanyahu, the Iranians, irked by the Abu Kamal air strike, took to the warpath in earnest, as evinced by the unusual speed of their retaliation. They normally take weeks before retaliating, but this time, took two hours. DEBKA Weekly’s intelligence sources report that Iran’s Middle East warfront commander, Al Qods chief Gen. Qassem Soleimani conferred with the Al Qods command center at Al Kiswa, 13km south of Damascus, and they decided to assign the Imam Al Hussein Shiite militia with shooting two Grad surface missiles at the IDF positions on Mt. Hermon north of the Golan. This operation, which missed its target, was meant as a warning to Israel that further attacks were yet to come.

The IDF high command took the warning to heart and revved up preparations for Soleimani and Hizballah’s Hassan Nasrallah to upscale the payback against targets in Israel for a crescendo on the eve of Israel’s election day. Meanwhile, almost daily rocket fire by Iran’s minions in Gaza against the southern Israeli towns of Ashkelon and Ashdod are keeping pre-election Israel on edge. Like the rocket fire from Syria, the salvos from Gaza are kept within bounds. However, the sight of Netanyahu being bundled out of an election rally in Ashdod on Tuesday amid a rocket attack sparked the vocal scorn of his rivals for the defense minister (Netanyahu), denigrating him as unfit for the job of securing the nation against enemy aggression. This was a propaganda win for Israel’s enemies at little cost.

Earlier that day, the prime minister’s announcement that he would travel to Sochi on Thursday for talks with the Russian president further fueled Tehran’s resolve to remove him from their path, especially in view of the conversation’s central subject: initiating a trilateral US-Russian-Israeli summit for determining Syria’s future without Iran (as DEBKA Weekly 861 first revealed on Sept. 6: US-Russia-Israel Parley Shaping up to Realize Iran’s Eviction from Syria).

This would be the worst-case scenario in Tehran’s book, further aggravated by Israeli being given an equal role with two world powers in decision-making on a key regional issue. This Tehran would never countenance. While Iran and its satellites had so far refrained from going all the way in their assaults on Israel, Tehran may yet resort to extreme measures to torpedo this initiative before it takes off from Sochi.

Netanyahu and Israel’s top military and intelligence officials are well apprised of this peril and on standby for either or both the northern and southern fronts blowing up in flames to drown his chances of re-election next Monday.

Netanyahu made a last-ditch bid to cool the rising tension with a back-channel warning to Tehran, Hizballah and Hamas that he would not hesitate to meet any violent provocations with an all-out offensive against their forces in Syria and Lebanon as well as Gaza. He would then postpone the ballot – even at this late date – and lead a national unity government to war.