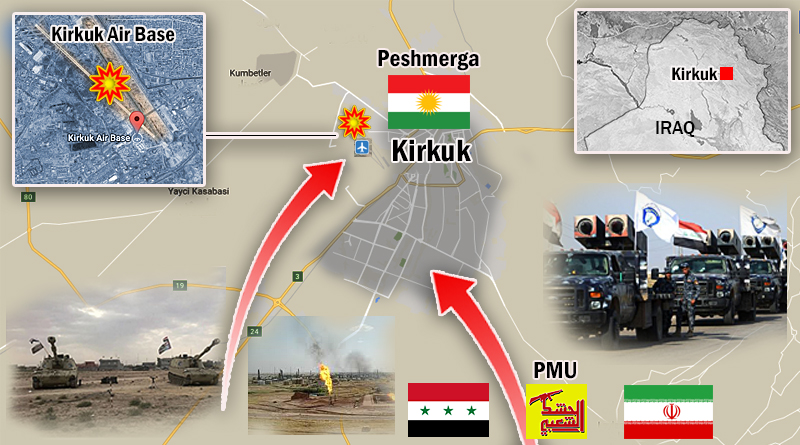 Baghdad claimed that Iraqi units led the operation launched early Monday against the Kurds over Kirkuk.. DEBKAfile: Pro-Iranian Shiite militias are in the forefront.
An Iranian-Iraqi war on the semiautonomous Kurdish Republic of Iraq was launched early Monday, Oct. 16, around Iraq’s northern oil center of Kirkuk. It began with an attack on the K1 military air base, the town’s airport and the oil fields south of the city. An official Baghdad statement named Iraq’s Security forces (ISF), its Counterterrorism Services (CTS) its Federal Police and the Shiite Popular Mobilization Units (PMU) as leading the engagement in three columns with the Kurdish Peshmerga defending the city.

However, DEBKAfile’s military and intelligence sources report that pro-Iranian Shiite militias were the spearhead of the operation, fighting under the direct command of Revolutionary Guards (IRGC) Gen. Qassem Soleimani. They consist of the Shiite Badr Organization’s Turkmen Brigade, the 16th PMU brigade and the 41st, 42nd and 43rd brigades of the Asai’b Ahl al-Haq forces of the PMU.
Iranian Revolutionary Guards officers have been placed at the head of each of the Shiite units taking part in the Kirkuk operation against the Kurds.
The makeup of these forces is highly significant for two reasons:

He also feared the US, which opposed his assault, would disrupt Iraqi aerial activity. US fighter jets were sighted over the battle arena Monday monitoring events.
Therefore the Iraqi war effort is confined for now to tanks, heavy artillery, mortars and heavy machine guns.

Our military sources report that 15,000 Kurdish fighter are arrayed to defend Kirkuk. The bulk consist of local Peshmerga fighters, but Kurdish militiamen are pouring in all the time from outside.

Overnight, thousands of Turkish PKK Kurdish separatists came down from their hideouts in the northern Iraqi Qandil mountains to support the defenders. The first Syrian Kurdish YPG militia units, having interrupted their engagement against the Islamic State in eastern Syria, were spotted lining up on the Syrian-Iraqi border ready to attack Iranian-Iraqi contingents from the rear.

It was unclear whether American troops were in the area Monday morning. A spokesman for the US-led coalition in Baghdad did not immediately respond to a request for comment. This no-comment response cannot hide the failure of President Donald Trump and his Defense Secretary James Mattis to prevent the outbreak of hostilities between two US allies provoked by Tehran.
A small American advance command center is stationed in Kirkuk. While American officers tried to broker a compromise agreement between the parties to prevent the fighting, the Iranian Guards general Soleimani was busy orchestrating the Kirkuk warfront. And he achieved Tehran’s goal, the outbreak of a war between the Iraqi Army and the Peshmerga, both trained and equipped by the United States for battling Islamic State.

23 thoughts on “Iran and Iraq go to war with the Kurds over Kirkuk. Rev Guards take part in defiance of US”