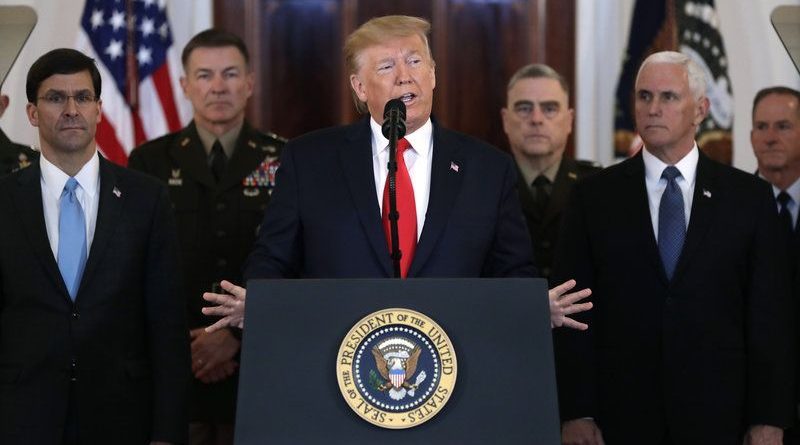 The 15 Iranian ballistic missiles launched against two US air bases in Iraq, straight after the funeral of top commander Qassem Soleimani, counted as the first blast of the Islamic Republic’s revenge for his death in a US air strike on Jan. 3. US Defense Secretary Mark Esper, playing down its effect, said the next day that “nothing major was hit, only tents, a parking lot and a helicopter.”

Satellite images show a different picture. The first ever Iranian ballistic missile attack on US military targets was launched from three locations in Iran, using the Qiam 1, which is a short-range ballistic missile designed and built by Iran. It was developed from Shahab-2, a licensed copy of the North Korean Hwasong-6, which in turn replicated the Soviet-era Scud-C missile. The Qiam 1 has a range of 750km and 500m accuracy.

The satellite photos, taken by the commercial company Planet, show at least five structures at the big Ain al-Asad airbase in western Iraq – hangars and buildings – hit hard by a barrage of Iranian missiles. They were precise enough to strike some individual buildings “dead center,” said one analyst, confirming previous DEBKA Weekly reports that Iran had made important advances in upgrading the precision of its ballistic missiles.

On Thursday, Jan. 9, head of the Revolutionary Guards Aerospace Force Brig. Gen. Amir Ali Hajizadeh stated that the missile attack on American bases in neighboring Iraq was only the start of a series of attacks that will take place across the entire region.

Far from “standing down,” therefore, as President Donald Trump commented on Wednesday, Iran has set its course firmly on the offensive – whether by direct attacks on US targets or by letting the Shiite militias held so far in reserve off the leash. Some informed sources estimate that the Iranian leadership may space out its attacks to build up for a big bang on or around Feb. 11, the anniversary of the 1979 revolution that brought the Islamic regime to power. This might be taken by the ayatollahs as the most fitting moment for bringing their revenge on the US to a resounding climax.

The paramilitary Shiite groups thirsting for vengeance for the loss of their own leader, Abu Mahdi Muhandis in the US attack that killed Soleimani, were told on Tuesday to contain their impatience. Ali Shamkhani, Secretary of Iran’s supreme security council, assured them that Tehran is considering no less than 13 “retaliation scenarios” – the least of which is “a historical nightmare for the United States.” Vengeance for the death of Qassem Soleimani, he said, would not take the form of one operation, although he offered no further information.

In the volatile Middle East, all the factors underlying the decisions on any given day may be swept away or overtaken by new upsets in hours. What is most likely to survive is Tehran’s choice of Iraq as its preferred operational arena against America.

It is conveniently close by, just across the border from Iran, unlike more distant Middle East battlefields. Readily available are some quarter of-a-million trained and armed Shiite militia fighters ready to fight for the Islamic Republic.

The two main militias alone, the Popular Mobilization Units (PMU) which lost its leader in the US air strike and the Badr Brigades under Hadi Al-Amiri, account for150,000 fighters. One would spearhead the battle against US forces and the other lead the political takeover of Baghdad. Two smaller groups, the Imam Ali Battalions and the Hezballah Brigades, are just as eager to take on American forces.

Tehran, furthermore, trusts the impact of Soleimani’s killing to bring hundreds of thousands of Shiites onto the streets to vent their fury on the US and demand its troops’ expulsion from their country. This was the very strategy charted by the dead general for unifying Iraq’s Shiites in subservience to the regime in Tehran.

In addition to those reserve options, Iran may open a second front against US forces in Syria with the help of Iraqi Shiite militia groups already on active service in Syrian-Iraqi border districts.

Most of all, the regime can count on the Lebanese Hizballah to rally to the cause of Shiite vengeance for the death of the supreme commander of all Iran’s Shiite proxies. When Hizballah pulled the bulk of its fighting strength back home to neighboring Lebanon. after six years of combat for Bashar Assad, it retained some units in Qalamoun Mts bases on the Syria-Lebanon border.

All these assets are available to Iran close by, whereas the US would have to call up external reinforcements, whether from other Gulf and Middle East facilities or from faraway home bases in America. Even without a full-scale war, limited combat with Iran and its allies would leave America’s 5,000+ troops in Iraq seriously shorthanded. They would have to be heavily augmented to some 40,000 to 50,000. To fund this venture, the Trump administration would need to shelve its plans to divert a large chunk of expenditure in Afghanistan to the domestic economy – a tough call for President Trump to make in his 2020 campaign for reelection.

But for Iraq, the outlook is devastating indeed. In 2003, when the second Bush administration invaded Iraq, the notion of carving the country into three independent entities ruled by Shiite Muslims, Sunni Muslims and Kurds, was broached and quickly thrown out as impractical.

This concept loomed over Iraq even before Soleimani’s earthshaking death. It was prompted by the months of violent protests sweeping through the Shiite regions of the south and Baghdad, which brought central government to collapse, while the Sunni and Kurdish provinces in the north, west and center, quietly ran their own affairs under US military protection. In the last months of 2019, Iraq had already started falling into three de facto self-ruling entities. A straight Shiite-US fight would accelerate the breakup and spark a destabilizing process lasting for years. Trump’s critics’ charge that he has catapulted America into another endless Middle East war is not without merit. He answered them by accentuating the negotiation option for Iran in his latest comments. However, supreme leader Ayatollah Ali Khamenei’s uncompromising radicalism and violent expansionism have left the United States with few options but strong action for holding Iran’s belligerence in check. The tough US sanctions were bound to generate a military contest between Washington and Tehran. For now, there is nothing and no-one around capable of arresting this dangerous course.