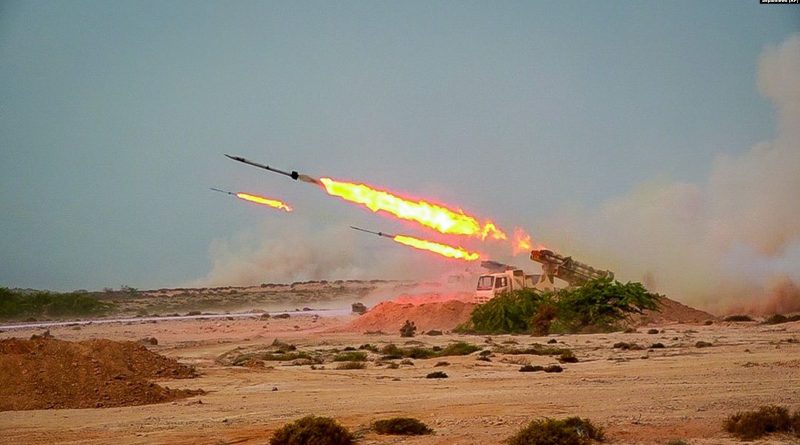 Iran’s Revolutionary Guards Wednesday, July 29, launched underground ballistic missiles in a military drill in which a mock US aircraft carrier was attacked in the Strait of Hormuz. Drone footage showed two missiles blasting out from covered positions in what appeared to be a desert plateau in central Iran. Gen. Amir Ali Hajizadeh, the head of the IRGC’s aerospace division said this was the first underground launch of a ballistic missile. Most of this arsenal is believed to be hidden in underground silos.
A day earlier, footage of the first day of exercise, dubbed Payambar-e Azam 14 (The Great Prophet), broadcast on state television showed a missile fired from a helicopter leaving a trail of smoke before appearing to smash into the side of the fake warship, a rough replica of the USS Nimitz. Other footage from the exercise showed speedboats encircling the replica, commandos rappelling onto the deck of the vessel, and scuba forces underwater. Antiaircraft batteries were seen firing from a location that the report described as being near the port city of Bandar Abbas.

The missiles used in Iran’s military exercise were not identified.

The US Navy condemned the “irresponsible and reckless behavior by Iran,” calling it an attempt “to intimidate and coerce.”

The firings prompted a military alert at two US CENTCOM Gulf headquarters – the Al-Dhafra Air Base at Abu Dhabi in the UAE and the Al-Udeid Air Base in Qatar. Troops were told to seek cover. “The incident lasted for a matter of minutes and an all clear was declared after the threat … had passed,” said Central Command spokeswoman Beth Riordan.

A semiofficial Iranian news agency published a graphic showing an American carrier into the shape of a casket with a set of crosshairs painted on it and a caption quoting Supreme Leader Ayatollah Ali Khamenei as pledging to avenge the US drone strike that killed top Iranian general Qassem Soleimani in January.