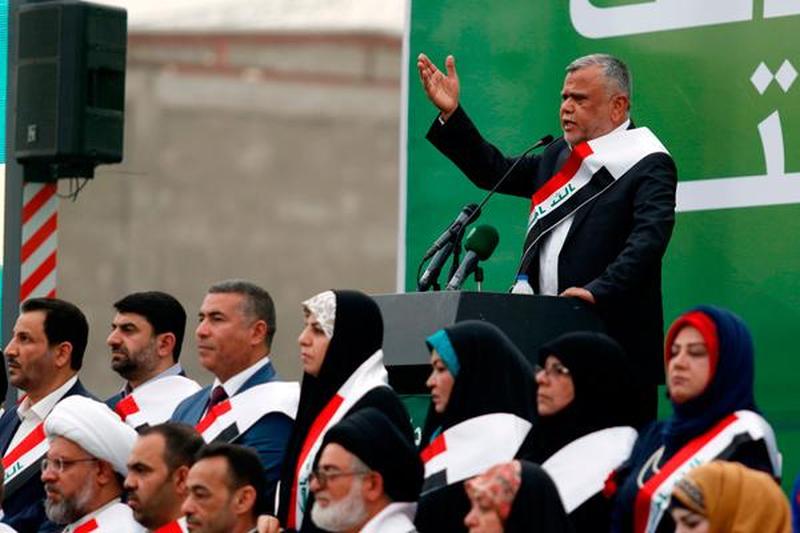 As US President Donald Trump fights to get US troops out of Syria, Tehran is hatching a plan for pushing the US military out of Iraq, to boot. DEBKA Weekly’s sources cite intelligence data reaching Washington, which finds Adm. Ali Shankhani, head of Iran’s Supreme National Security Council, in Baghdad performing the spadework for this very goal. His plan is to engineer a victory in the May 12 general election for the Popular Mobilization Units (PMU(, the pro-Iran roof organization of some 60 Shiite militias and its leader, Hadi Al-Ameri.

Al-Ameri, a former Iraqi transportation minister and head of the Shiite Badr militia, is the Revolutionary Guards’ favorite of all the Iraqi Shiite party leaders. The Shiites account for 65 percent of Iraq’s population of 38 million and are therefore the preponderant segment of the Iraqi electorate of an estimated 24 million eligible voters. Al Ameri followed the law by formally establishing a new political party called Conquest Alliance to run for election and compiled a list of candidates for the 309-seat parliament. Most of them are Shiite militia chiefs, who formally resigned their military posts to qualify as candidates.

Al Ameri’s Conquest Alliance has formidable rivals in the Shiite stakes. There is the Victory Coalition, headed by outgoing Prime Minister Haydar al-Abadi; the Rule of Law Alliance, led by former prime minister Nouri al-Maliki – which relies heavily on the Dawa Party; and Marching towards Reform, which is an alliance formed by the Shiite cleric Moqtada al-Sadr’s party with the secular Iraqi Communist Party and Istiqama, a group of technocrats.

As a young radical firebrand, Sadr staged a major revolt against US forces 15 years ago. At 44, he is more pragmatic and open-minded, but remains a charismatic figure in Iraq, able to bring hundreds of thousands of followers out to the streets.

Shamkhani reckons, according to DEBKA Weekly’s sources, that if Tehran’s favorite, the Conquest Alliance comes up short of a majority, Al Ameri will be able to form a coalition with Sadr’s Marching towards Reform. Their many differences will be bridged by the shared goal of ousting the Americans from Iraq. Shamkhani has drafted a document for sealing this pact ready for presentation to the first session of the newly-elected parliament in Baghdad. Our sources note that Tehran assigns a higher priority to this prospective coalition than to the choice of prime minister.

Nearly 9,000 US military personnel, mostly air force and marines, are currently deployed at several bases across Iraq, including Habaniya near Baghdad, Al Assad in the western province of Anbar and a third facility in the Shiite-dominated, oil-rich south.

Tehran is also deeply immersed in the run-up to Lebanon’s general election, which takes place on May 6, a week before the vote in Iraq. Tehran is determined to boost Hizballah, its Lebanese proxy, for gaining a parliamentary majority and forming the country’s first pro-Iran government. After installing a puppet government in Lebanon and levering open a land bridge from Iran to the Mediterranean, Tehran will be well on the way to installing its coveted Shiite Crescent across the Middle East.

The Trump administration, which appears to be reconciled to losing America’s foothold in Beirut to the Islamic Republic, is now fighting a rearguard action to save Baghdad.