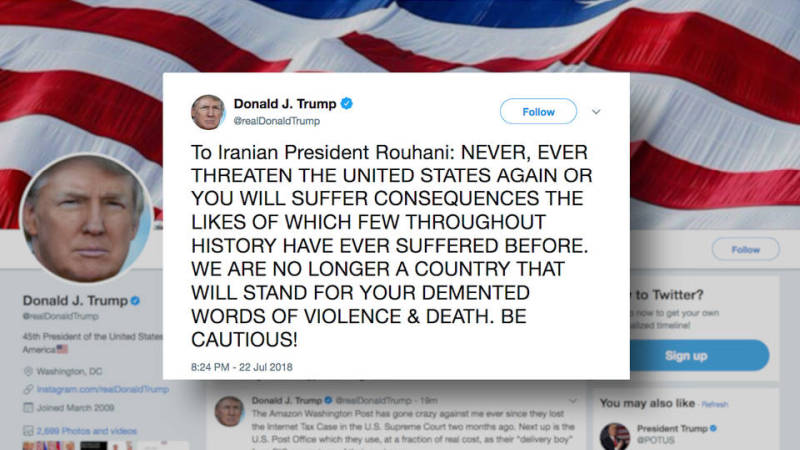 Iran is matching the Trump administration horrible threat for horrible threat, but Tehran has also launched real payback for the US sanctions squeeze in its first chosen arena: Iraq.

When Iranian President Hassan Rouhani this week threatened the US with “the mother of all wars,” President Donald Trump fired back: NEVER, EVER THREATEN THE UNITED STATES OR YOU WILL SUFFER CONSEQUENCES THE LIKES OF WHICH FEW,,, HAVE EVER SUFFERED BEFORE.”

Some nervous Americans wondered out loud whether their president was about to declare all-out war on Iran. The short answer is no. But this does not answer the next question: What happens if Trump fails to bring Iran to heel with the “worst economic sanctions in history” currently being phased in – if the ayatollahs’ regime survives and remains in place? The White House Security Council and State Department are mostly confident that the regime will collapse under the weight of a drowning economy and domestic unrest. But DEBKA Weekly’s analysts don’t see this occurring in the foreseeable future.

The ayatollahs are not waiting for US penalties to pile up further. Next month, Tehran is in for new US banking sanctions and, on Nov. 4, an embargo on its oil sales. Already, the currency has plunged to 90,000 rial per dollar as the street and bazaars react.

However, the protests, which last month swept through Iran’s towns, including the capital Tehran, quickly subsided when people realized that their government had no ready solutions for saving their falling living standards against the rial’s plunge on international markets. Their strikes and demonstrations were only making things worse by further depressing the national currency. Also short-lived were the turbulent anti-government demonstrations last month in the oil-rich southern province of Arabic-speaking Khuzestan. Stirred up by Saudi and UAE agents, they were predominantly local in character and did not catch on farther afield.

Tehran was more successful. DEBKA Weekly’s sources report that the unrest it incited across Iraq’s Shiite south against the Haydar al-Abadi government thwarted US efforts to get a government in Baghdad on its feet and free of Iranian influence, three months after Iraq’s general election. Iranian undercover cells ignited the first spark in Iraq’s oil-rich Basra and it quickly caught fire across the Shiite cities of the south, up to and including Baghdad.

In contrast, an attempt by Western intelligence agencies, including the CIA, to send armed Kurdish groups belonging to the Party of Free Life for Kurdistan (PJAK) into Iran backfired. On Sunday, July 21, those groups staged an overnight attack near the border town of Marivan in the Kurdish province of Iraq, some 620km west of the capital, killing at least 10 Iranian border guards. In consequence, Tehran and Ankara came together to establish a joint Iranian-Turkish command center for initiating attacks on Kurdish targets in Iraq.

A furious response came that day from US Secretary of State Mike Pompeo. Speaking to a largely Iranian expatriate audience at the Ronald Regan Presidential Library, he called Iran’s clerical and military rulers a “kleptocracy skin to the mafia.” Pompeo stopped short of calling explicitly for regime change, only announcing that US government broadcasting in Farsi was to be expanded. This will be a platform for urging the Iranian people to rise up against the tyrannical regime in Tehran.

But, meanwhile, for every new round of US sanctions, Tehran is planning to replicate its initial success in in Iraq by hurting US interests in other parts of the Middle East where America has a stake.