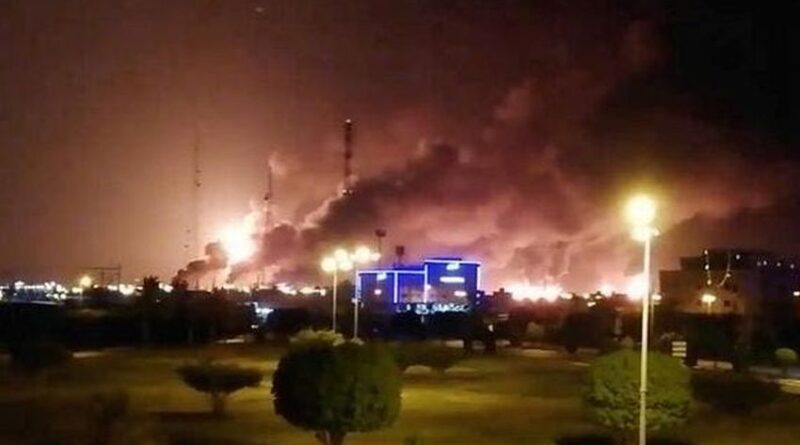 US goodwill gestures and warning signals have clearly lost their punch for Iran – even when backed by the mighty US B-52 bombers flying over their heads. After dozens of attacks on Saudi Arabia in recent weeks, Iran-backed Yemeni Houthi rebels outdid themselves on Sunday, March 8 by sending 14 armed drones and 8 ballistic missiles flying toward the Saudi petrol tank farm at Ras Tanura, one of the largest oil shipping ports in the world, and the residential area of Dharan that houses foreign oil workers, including Americans.  A gag order from Riyadh concealed the scale of injuries and damage. (See attached picture.)
On the same day, two heavy nuclear-capable US B-52 Stratofortress bombers made a round trip to the Gulf and back to home base, escorted through the skies of the region by British, Israel, Saudi and Qatari warplanes. This was the heavy bomber’s seventh mission over the Gulf and the second since Joe Biden took office as president.

In sharp contrast to actions set in motion from Tehran, America’s answer to the Yemeni attack on Saudi Arabia scarcely resonated. State Department spokesman Ned Price called it “unacceptable and dangerous, and put civilians at risk, including Americans.” He added, “They need to stop attacking and start negotiating.”

But Iran’s Yemeni proxy was clearly on the march even after the Biden administration made the gesture of lifting the terror designation and halting arms sales to Saudi Arabia.

The template for America’s non-response to devastating Iranian-instigated attacks on Saudi Arabia was set in September, 2019, when the Saudis’ main oilfields at Abqaig and Khurais were hit squarely and precisely by the same mix of drones and ballistic missiles. The attack, which cut Saudi oil production by half, was launched jointly by Yemeni Houthis in the south and pro-Iranian Iraqi Shiite militias from the north.

Not content with instigating a major assault on Saudi Arabia, Iranian officials also on Sunday had strong words for Israel too. Defense Minister Amir Hatami threatened to raze Tel Aviv and Haifa to the ground if Israel conducted a pre-emptive attack on Iran. Since this threat has become a constant, Hatami reinforced it by saying that, this time, he had orders from supreme leader Ayatollah Ali Khamenei to translate those words into an active operation.

Tehran has a proxy nearby, the Lebanese Hizballah, for carrying out its threat to hit Israel’s northern port of Haifa, its population and key strategic infrastructure. But to seriously damage Tel Aviv, Tehran would have to do its own work with ballistic missiles. This has not happened before, but the threat should be taken seriously, after Iran felt confident enough to destroy important Saudi oil infrastructure without fear of American reprisal.

Another significant event on Sunday was confirmation that Iran’s Revolutionary Guards are keeping up an uninterrupted campaign of terror against Israeli and Jewish targets worldwide. More than a month after a crude bomb exploded outside the Israel embassy in January, India’s counterterrorism agencies fingered the Iranian Al Qods force for the plot by means of a local Indian Shiite cell who activated it remotely.

This ties in also with the Iranian attack on the Israeli cargo ship MV Helios Ray in the Gulf of Oman on Feb. 26.

This escalating run of Iranian aggression has been ongoing for weeks without a comeback, whether from the US, Israel or Saudi Arabia. Even Israel’s systematic aerial campaign against Iran’s military presence in Syria is running out of effective steam.

The Iranians seem to feel that although their enemies loudly threaten to prevent their acquisition of a nuclear bomb, they are not about to go into action. Tehran has time meanwhile to safely advance on its quest for a nuke. The UN nuclear watchdog reported on Monday that Iran has started enriching uranium with a third cascade of advanced IR-2m centrifuges at its underground plant at Natanz, further breaching Iran’s 2015 deal with major powers. The fourth cascade of 174 IR-2m centrifuges was installed but not yet fed with uranium (Natural UF6), and installation of the fifth was ongoing.