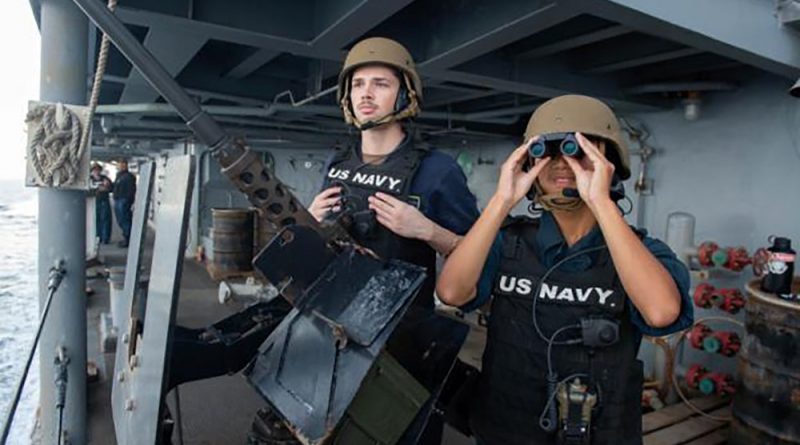 The US and Iran ramped up their preparations for direct military engagement on Monday, Nov. 25: A top Iranian general’s threatened to destroy the US, Israel and Saudi Arabia, and the USS Abraham Lincoln Carrier Strike Force moved into position opposite central Iran’s coastline..

Addressing a mass pro-government rally in Tehran, Iran’s Revolutionary Guards chief, Gen. Hossein Salami, shouted, while burning US and Israeli flags, “We have shown restraint… we have shown patience towards the hostile moves of America, the Zionist region and Saudi Arabia against the Islamic Republic Iran,” said Salami. “If you cross our red lines, we will destroy you. If Iran decides to respond, the enemy will not have security anywhere. Our patience has a limit.”

DEBKAfile’s military sources find the clue to Iran’s next move in his assertion that its patience has a limit. It indicates that while up until now Tehran hesitated to set a date for its next strike on an American or an Israeli target – or both – Iran has now finally decided to go forward.

Aware that this strike may come at any moment, CENTCOM chief, Gen. Kenneth McKenzie predicted on Saturday that Iran will probably launch another attack in the Middle East.  He was speaking at a regional security conference at Manama, Bahrain, and noted that, despite the American troop build-up in the region, Tehran had not hesitated to attack Saudi oil fields on Sept. 14.

Iran’s leaders were also spurred toward military action by the return of the USS Lincoln carrier strike force to the Gulf for the first time since May, when the vessel moved into the Arabian Sea. Large-scale US marine, navy and air might aboard the Lincoln are now in position opposite Iran’s shores.

They also took note of the arrival in Israel of Gen. Mark Milley, Chairman of the Joint US Chiefs of Staff, and his quiet talks with Chief of Staff Lt. Gen. Aviv Kochavi. Their joint statement – “The two generals discussed operational questions and regional developments” – was interpreted in Tehran as meaning that the US and Israel had finalized coordinated plans for joint military operations against the Islamic Republic.

Since last week, Israel has been on high war alert for Iran’s potential payback for its wide-ranging air strike on Al Qods positions near and south of Damascus on Nov. 20. It is estimated in Israel and the US that multiple Iranian personnel were killed. They did not expect Tehran to let this go without responding.

The coming issue of DEBKA Weekly (for subscribers), out on Friday, Nov. 29, offers a sweeping, detailed survey of US, Israeli and Iranian preparations for their impending military showdown. If you are not yet a subscriber, click here.

113 thoughts on “Iran poised to strike US/Israeli targets. US forces gear up for action. USS Lincoln carrier enters the Gulf”