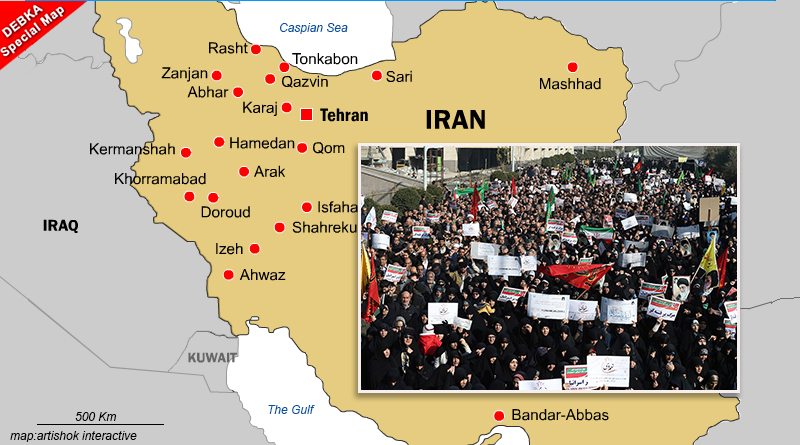 The four days of anti-government protests in Iran have tipped over into exchanges of gunfire. A general strike was called for Tuesday. The death toll jumped to 21.
The regime in Tehran was taken aback Sunday night, when protesters across the country stormed bases of the Basij (the Revolutionary Guards domestic police arm) and set them on fire. This was not disclosed until Monday, Jan. 1, when  Iranian state television reported that “security forces had repelled attempts by armed protesters to take over police stations and military bases.” It was also officially revealed that at least 12 people were killed in nationwide protest rallies since Thursday.

The regime refrained from cracking down hard on the protest movement hitherto because it was expected to peter out. This calculation was based on three considerations:

Nonetheless, while lacking any clues to a guiding hand behind the outbreaks, officials in Tehran are beginning to scent that it is not entirely spontaneous and one or more wirepullers may be at work. This was indicated by two new developments:

The national strike announced for Tuesday was one; and, also, for the first time, on Sunday night, small bands of demonstrators pulled out guns and started shooting at Basij forces. Those forces were then permitted for the first time to shoot back in self-defense. State TV reported at least 21 deaths in the national protest rallies. DEBKAfile’s Iranian sources estimate that the number of fatalities is likely to rise as the week wears on, since the Islamic regime is bound to try and break the national strike before it paralyzes the country.
The coming issue of DEBKA Weekly, No, 784, out on Friday, Jan. 5, will study in depth the anatomy of the new Iranian protest movement and its likely repercussions for the region. Our intelligence experts will expose the secret war which clandestine Western and Arab agencies are waging behind the street demonstrations against Iran.