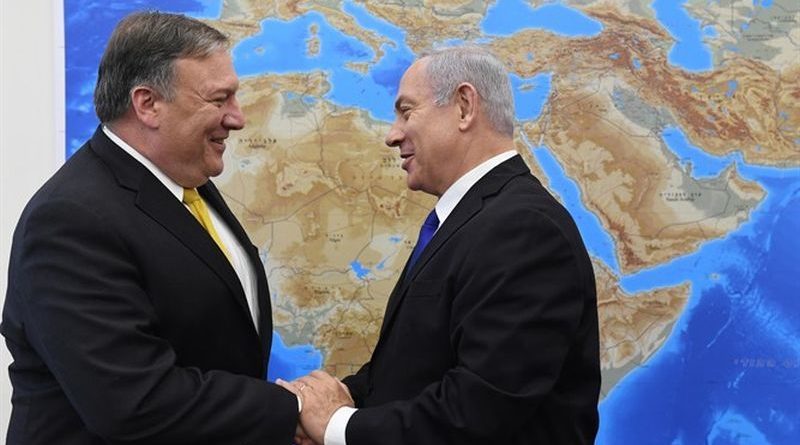 Iran has poured reinforcements armed with missiles and air defense weapons into Bushehr on its central Gulf shore and the offshore island of Abu Musa, DEBKAfile’s military sources report.  In Lisbon, Prime Minister Binyamin Netanyahu and US Secretary of State Mike Pompeo on Wednesday, Dec. 4, discussed the threats coming from Iran, as US officials reported increasing intelligence of potential Iranian aggression.

Addressing reporters, Pompeo hailed US-Israeli bipartisan relationship against Iran’s “destabilizing influence in the region,” while Netanyahu noted: “Iran is increasing its aggression as we speak. We are actively engaged in encountering that aggression,” he said.
As they spoke, unidentified aircraft struck a large Iranian weapons depot and base holding forces of the Revolutionary Guards’ Al Qods, Iraqi militias and Hizballah, near the Syrian-Iraqi border town of Abu Kamal. The nearby border crossing serves Tehran as a land corridor for transporting advanced weapons to Hizballah and other allies. Foreign sources report that this base has been repeatedly attacked by Israel in the past.

Our military sources note it just so happens that whenever the Israeli prime minister and US Secretary of State get together, an Iranian military target is usually attacked either before, during or after their meeting.
Another of Iran’s arms routes to its proxies ran into trouble on Wednesday, when a US Navy destroyer for the first time intercepted a stateless ship in the Gulf of Oman found to be carrying a “significant amount of advanced missile components,” evidently being smuggled from Iran to the Yemeni Houthi insurgents. Tehran halted those consignments some months ago, our sources reported; this incident indicates they have been resumed.

At the same time, DEBKAfile’s military sources disclose Iran is heavily ramping up its military strength at Bushehr on its Gulf coast, including a large supply of ballistic missiles – in apparent expectation of an American attack or counterattack. Last week, the USS Abraham Lincoln strike group entered the Gulf from the Arabian Sea and docked at Bahrain opposite central Iran.
Also reinforced in the last few days is the strategic Iranian island of Abu Musa, the site of a large IRGC military command post. This island is situated opposite the United Arab Emirates and the Strait of Hormuz. The reinforcements had come with large array of missiles, including sea-to-sea, surface and air defense batteries.

US intelligence officials also refer to “a possible Iranian arsenal” in Iraq (as DEBKAfile has more than once reported).  It was said to contain short-range missiles with a range of nearly 1,000km, close enough to reach Israel from Baghdad’s outskirts.

US Under Secretary of Defense for Policy John Rood said on Wednesday that there are indications that Iranian “aggression” could take place in the future amid “aggravating relations between Tehran and Washington.” Other US officials spoke of “consistent intelligence in several weeks” indicating a possible Iranian threat against US forces and interests in the Middle East. They referred to movements of Iranian troops and weapons that “could be put in place for a potential attack if ordered by the regime.”