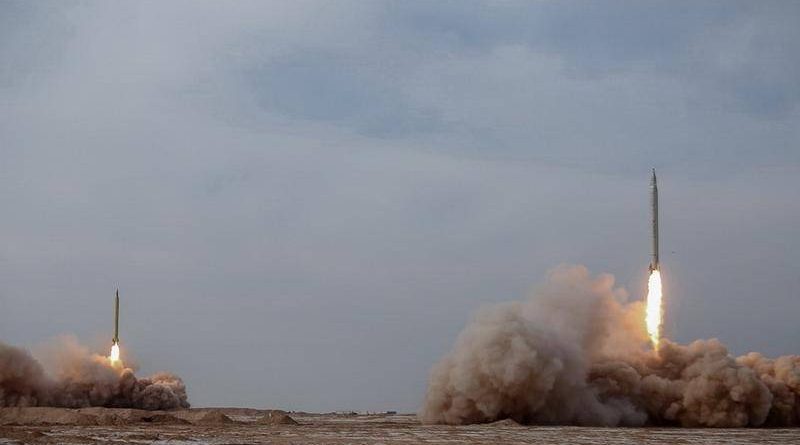 A video released by Iran’s state TV on Saturday, Jan. 16, showed missiles of “various classes” targeting “enemy’s battleships” and destroying them from 1,800km The missiles were “fired from central Iran at targets in the northern Indian Ocean,” said the Revolutionary Guards, which conducted the drill, its third military exercise in two weeks. A full array of top Iranian generals watched the drill: Chief of Staff Maj. Gen. Muhammad Bagheri, Guards chief, Maj. Gen. Hossein Salami and aerospace commander Brig. Gen. Amirali Hajizadeh.
Gen. Bagheri said that the use of “long-range missiles for maritime targets indicates that if the enemies… show any ill will, maritime trade routes or territory will be targeted and destroyed by our missiles.”

Iran has a missile range capability of up to 2,000km – far enough to reach Israel and US military bases in the region. As part of the drill, the Guards launched a barrage of “new generation” surface-to-surface ballistic missiles against simulated enemy bases in Iran’s central desert. The third exercise included Zolfaghar and Dezful ballistic missiles as well as bomb-carrying drones.

The Islamic regime is evidently building up its chips in time to confront the new US President Joe Biden ahead of his inauguration on Wednesday, Jan. 20. Biden has indicated he is ready to re-engage Iran in nuclear negotiations provided Tehran complies with the original 2015 deal. Tehran has responded: first lift sanctions. The president-elect has just appointed Wendy Sherman, a veteran of Obama administration nuclear diplomacy with Iran, as the State Department’s No. 2