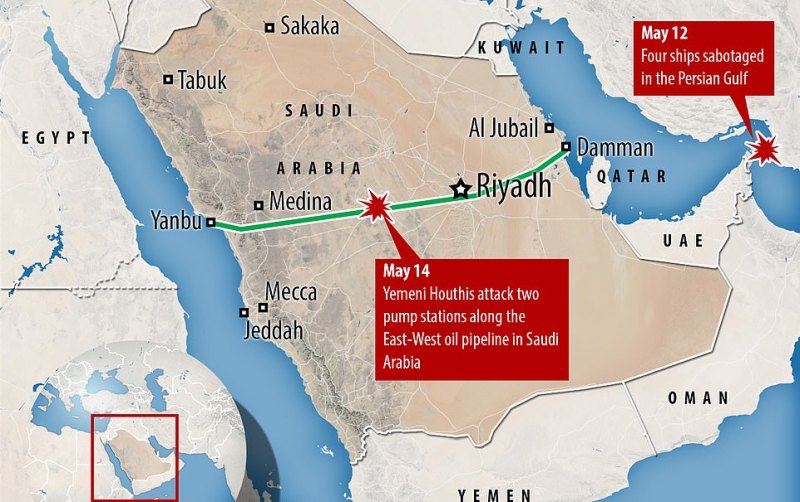 Iran never intended to stand by and allow US sanctions to grind its economy small, without raising a finger. But this week, the ayatollahs of Tehran caught the West by surprise simply by doing what they do best: Sneaking up on their enemy’s vulnerable points with a handful of saboteurs, small proxy units and a small team of frogmen – punishment on the cheap – while US and regional intelligence agencies were on the lookout in the wrong places. And so, Washington was at a loss on Sunday May 12, when saboteurs blasted four oil tankers outside the Fujairah port in the Gulf of Oman and followed up with an explosive drone attack on Saudi pumping stations in the desert.

DEBKA Weekly raises four questions in this regard:

1. Although fully aware that Iran was on the war path, intelligence watchers missed the import of the powerful explosions that rocket the Saudi port city of Yanbu last week. No group took responsibility and so, while Iran was plainly involved, the incident was sidelined by Washington and Riyadh – even though Yanbu is an important Saudi petroleum shipping terminal and home to three oil refineries, a plastics plant and several petrochemical factories. Both the US and Saudis hoped that if they kept quiet, Iran would let it go.

They miscalculated, as they soon discovered. The attacks on Gulf oil industrial infrastructure were not over. And on May 14, two of the IRGC’s tame journalists wrote that Yanbu was just the first in a series.

2. US Secretary of State Mike Pompeo went rushing to Baghdad on May 8 to caution President Barham Salih and Prime Minister Adel Abdul-Mahdi against allowing pro-Iranian or Shiite militias to attack US bass in their country. He acted on intelligence information that this attack was imminent, which seems to have been a temporary distraction from Iran’s more immediate plans to target Gulf oil.

3. The sabotage attack on the four tankers outside Fujeirah port in UAE waters, one of the world’s largest bunkering hubs lying just outside the Strait of Hormuz, caught the Americans and Gulf emirates completely off-guard. This was attested to by the thundering 10-hour silence that greeted the attack before the UAE came clean.

4. This event underlined the irrelevance of the US military buildup against the Iranian escalation – USS Abraham Lincoln carrier strike group, the B-52 bombers and the Patriot air defense systems. They were totally disproportionate to the scope of Iran’s choice of low-tech, undersize weapons. Even more unrealistic was The New York Times claim of Pentagon plans to send up to 120,000 troops to the Middle Est should Iran harm US forces in the region or restart its nuclear program. This story was vehemently denied by President Donald Trump.

All the above demonstrated that Western intelligence had been successfully hoodwinked into missing Iran’s six months of secret preparations to launch its anti-sanctions campaign with attacks on Gulf oil infrastructure. DEBKA Weekly’s sources has discovered that Tehran spent the time recruiting officers and men from the IRGC’s marines and the elite Al Qods Force’s top-secret Unit 190 and Unit 400. (These units are described in a separate article in this issue.).

They were given specialized training in sabotaging oil assets, including tankers, terminals, pipelines and pumping stations, as well as strategic targets like power grids, water supplies, bridges and autostradas. The hidden courses took place at IRGC bases on the Gulf islands of Abu Musa and the Tunbs. The graduates, no more than 150-200 in all, were split up into small units of three to five.

Our sources report that the sabotage attack on the four oil tankers outside the UAE was carried out by a squad of three frogmen. They crept up on the vessels in fast boats, jumped overboard, swam up to the tankers and affixed low-grade explosives to their hulls. The explosive charges were small, since Tehran did not mean to halt all oil traffic from the Gulf only to broadcast a message that there would be no idly standing by when the US tightened sanctions against its oil exports. The only tanker shown with a large hole in its hull just below the waterline was the Norwegian-flagged Andrea Victory, which too was not in danger of sinking. The UAE on Monday identified the other damaged vessels as very large crude carrier (VLCC) tanker Amjad and crude tanker Al Marzoqah, both owned by the Saudi shipping firm Bahri, and the UAE-flagged fuel bunker barge A. Michel.

The saboteurs were directed to go light on the four vessels, on orders from Supreme leader Ayatollah Ali Khamenei, so as not to provoke a major war escalation with the United States. At the same time, the attack drove home the message that if Iran can’t export its oil, Washington’s Gulf allies would also be prevented from doing so.

That was on Sunday, Two days later, Tehran raised the stakes: Yemeni Houthi insurgents loosed explosive drones against two Saudi pumping stations in the desert, midway on the 1.200km east-west pipeline from its eastern oilfields to the Yanbu terminal in the west. Iran has developed those armed drones to take the place of its antiquated air force for air strikes. With three low-cost operations by small, well-trained teams of saboteurs and terrorists, Tehran proved itself capable of disrupting major sources of the world’s energy under the noses of a superpower.