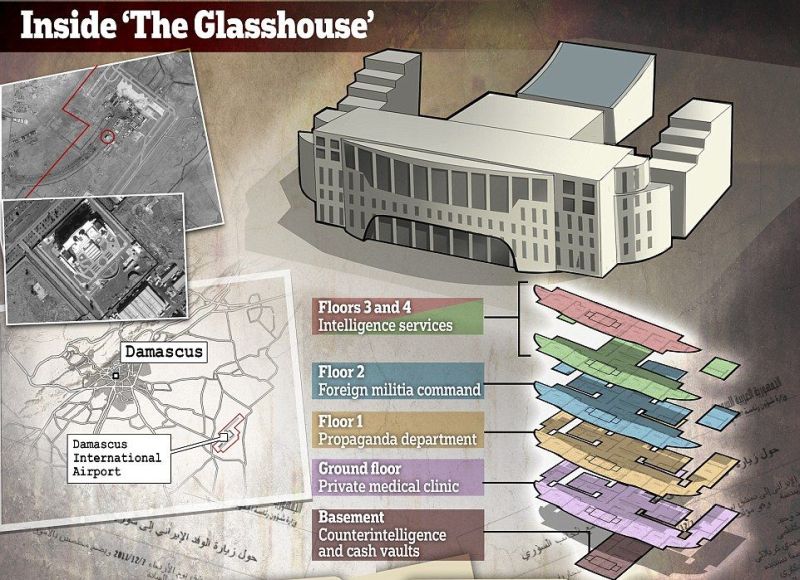 Of the military assets Iran was forced by heavy Israeli assaults to abandon in Damascus, the most painful must have been the “Glasshouse” (Maqar-Eshishei in Farsi), a large edifice of 100 rooms which housed its main military headquarters in convenient proximity to Damascus international airport, DEBKA Weekly’s sources report. This building was perfectly situated for the intake of troops, cash and equipment flown in from Tehran. Among the departments based there were counterintelligence, logistics, propaganda and the foreign allied command. The Iranian intelligence service controlled the Glasshouse from offices on the two top floors. The massive building’s anti-blast walls formed a quadrangle whose perimeter was guarded by heavily armed troops. The 1,000-strong staff worked on highly confidential materials and were subject to frequent security screenings.

The Glasshouse was emptied out in recent weeks and all its facilities removed to ostensibly safer quarters in the northern town of Aleppo. Iranian intelligence also handed back to the Syrian authorities the keys to another major complex, Damascus Airport’s Al-Mazza Military Airbase and the huge warehouses previously set aside for exclusive Iranian use.

Two further military complexes of unparalleled strategic value, Jamraya and Al-Kiswa, were also moved out of the Damascus region. Jamaya, several kilometers northeast of Damascus, officially belongs to the Scientific Studies and Research Center, where the Assad regime develops and produces chemical weapons and different types of missiles. In past year, the center served Iran as a factory for upgrading the precision of Hizballah’s missiles and rockets. The factory is not far from the Damascus-Lebanese Beqaa Valley highway.

Al Kiswa was set aside for the exclusive use of the Al Qods Brigades, the IRGC’s external, special operations arm. Located in the south near the Syrian M5 highway from Damascus to the Jordanian border, Al Kiswa is just 50km from Israeli Golan. The facility was a cluster of military sites containing white 18 x 27-meter hangars for stockpiling short- and medium-range missiles, able to reach every corner of Israel, and a supply of ammunition for the use of Iranian forces and Hizballah. Three large buildings there could accommodate up to 500 troops.

Iran has additionally evacuated 10 local command posts scattered between Damascus in the north and Quneitra in the south opposite Israel’s Golan. However small Hizballah and foreign militia groups are still holding these forts, all disguised in Syrian army uniforms and sporting Syrian military insignia.