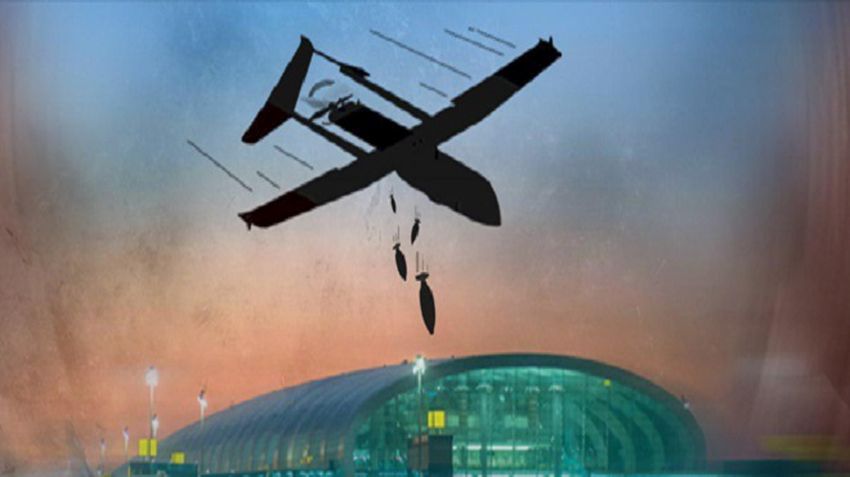 The Yemeni Houthi rebels’ first multiple drone attack on a Saudi air base at Jizan on Sunday, June 9, was the latest of five assaults orchestrated by Iran on US allies in a month. The two rockets fired on June 1 from Syria at Israel’s Hermon positions belonged to the same series.

At Jizan airport, the Yemeni insurgents used a squadron of their Iran-made armed drones to level Saudi drone bunkers and stations. Saudi air defense units were caught off guard and failed to shoot down a single enemy drone. Riyadh did not confirm that the attack took place.
In reference to the rocket fire on the Hermon, the IDF confirmed that it was deliberately aimed at Israel’s military outposts on the slopes overlooking the Golan from deep inside Syria, while declining to name the source. DEBKAfile’s military and intelligence sources can reveal that they were fired by an Iranian Revolutionary Guards unit on the orders of the Al Qods chief Maj. Gen. Qassem Soleimani. Israel was being warned that it is in Tehran’s sights, along with America’s Gulf allies. The rocket attack on Hermon should be grouped with the attacks on Saudi oil pumping stations and port, the sabotage of four oil tankers off the UAE shore and the rocket fire near the US embassy in Baghdad.

Israel retaliated the next day with a missile strike described by Syrian opposition sources as targeting “Iranian and Hizballah forces near Damascus.” However, according to DEBKAfile’s sources, Israel concentrated mainly on Syrian army sites including its missile stores at the big T-4 Air Base near Homs. The IRGC unit which launched the rockets remained, unscathed along with the launchers.

This Iran-instigated series of attacks were damaging but low key in that they avoided casualties. The Trump administration and US allies have affected an offhand response, citing Iran only indirectly or not at all. President Donald Trump strongly prefers sanctions as his weapon of choice for bringing Tehran to the table rather than military punishment. The Saudis, the Emirates and Israel have adopted this course. The UAE, for example, stated that a “state actor” was responsible for sabotaging the tankers, others “believe” Iran may be involved while claiming to be short of “evidence.”

US CENTCOM chief Gen. Frank McKenzie stated on May 31, while standing on the deck of the USS Abraham Lincoln carrier, that the American military buildup in the region had acted as a deterrent to Iranian aggression.

This was correct only insofar as there were no Iranian attacks on US military forces. However, the policy of nonchalance and non-punishment for five attacks on four Middle East nations, all ordered by Tehran since mid-May, may well galvanize the regime and its Revolutionary Guards into keeping going until the point at which Washington is forced to bend and give way on sanctions and other concessions.

The coming issue of DEBKA Weekly (for subscribers) out on Friday, June 14, uncovers secret US-Iranian negotiations underway at a secret venue in Baghdad. Don’t miss this and other exclusives offered in this week’s issue. To subscribe, click here.