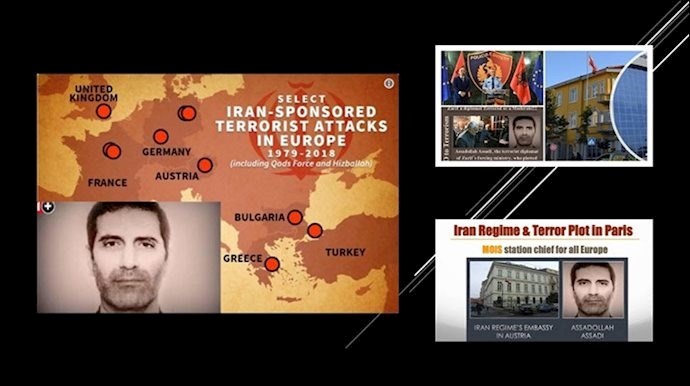 Claiming immunity, Assadollah Assadi, third secretary at the Iranian embassy in Vienna, refused to attend the Belgian court trying him for allegedly plotting to bomb a 2018 opposition rally outside Paris in June 2018. The rally was attended by high US and British officials and Donald Trump’s lawyer Rudolf Giuliani delivered a keynote speech. Belgian prosecutors are demanding the full 20-year prison term if the diplomat is convicted. They maintain Assadi is not entitled to diplomatic immunity in Belgium since he was accredited in Austria and arrested in Germany.

The affair became a cause celebre and stoked high tensions between Europe and Iran two years ago, although the attack was thwarted by a joint counter-terrorism operation conducted by EU intelligence services. Stiff sentences are also demanded for his three accomplices:  a Belgian Iranian couple, Nasimeh Naami, 36, and Amir Saadouni, 40, and a Belgium-based Iranian poet, Mehrdad Arefani.

The couple are accused of traveling to Luxembourg to meet the diplomat and collect the bomb – a package containing half a kilo of TATP explosive and a detonator. Their meeting at a Pizza Hut outlet was secretly observed by intelligence agents. The package was recovered from the couple’s car on the day before the rally. The poet was tagged as a prime mover of the plot in close collusion with Assadi. He was collared in France on a European arrest warrant issued by Belgium.

The trial which opened on Friday resumes on Thursday before handing down its verdict. All four accused are charged with attempting to carry out an armed attack and taking part in the activity of an armed group. It is not yet clear how the Belgium authorities will lay hands on their chief suspect, the Iranian diplomat, Assadollah Assadi.

At the time of the plot, Iran’s president Hassan Rouhani was touring European capitals to raise compensation for the US withdrawal from the 2015 nuclear deal and tough US sanctions. Rouhani is said to have been taken by surprise and embarrassed by the revelation of the Iranian diplomat’s role in orchestrating a terrorist bomb plot.