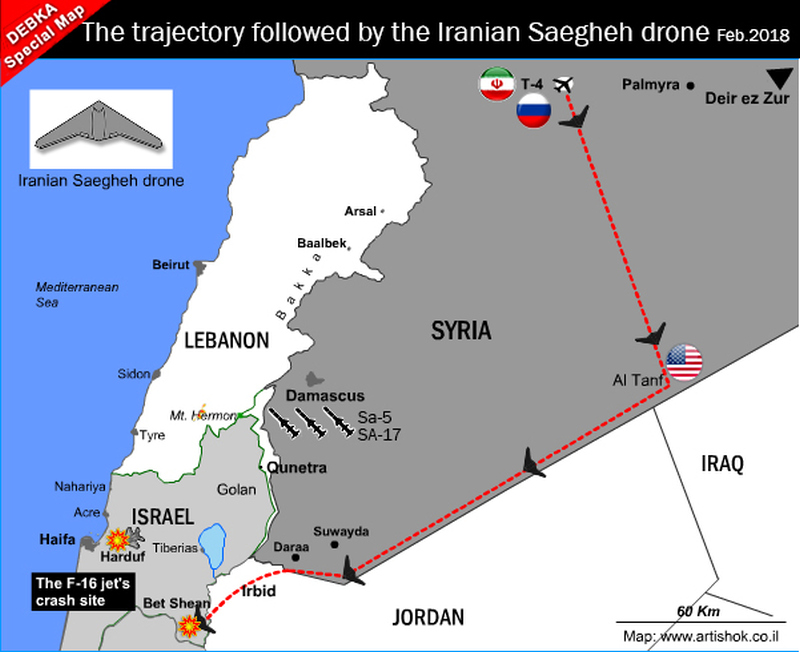 Many questions surrounded Iran’s purpose in launching its prize drone Saegheh (Storm) unmanned aerial vehicle into Israeli air space early Saturday, Feb. 10. Some answers can be found in the trajectory that Iranian strategists set out for the intrusion. The UAV, armed with four missiles, covered a distance of 507km from the Russian-Iranian T-4 air base in the Syrian Homs Governate (see attached map). Upon reaching the Syrian-Iraqi border, it turned south and followed the eastern side of the frontier up to the Syria-Iraqi-Jordan border intersection, where the American Al Tanf military base is embedded. The drone continued further south along the Jordanian-Iraqi border, crossed into northern Jordan and followed the River Jordan. The Saegheh then flew into Israel at a point south of the Sea of Galilee and reached the northern Israeli town of Beit Shean, whereupon it was taken down by Israeli Apache choppers.

Without accounting for the big picture, which the Iranian strategists appear to have missed, this route made military sense for three reasons:

What Tehran did not seem to realize was that the drone mission was playing into the hands of US intelligence, which had waited eight years for a chance to settle an irksome reckoning with the Iranians. DEBKA Weekly’s intelligence sources maintain that, far from being serendipitous, the Saegheh was drawn into a well-laid American trap. It was set in a way that would not implicate the US in a direct military encounter with Iran.

The CIA had never given up on payback for the loss of its top-secret US RQ-170 Sentinel stealth drone, which the Iranians captured eight years ago, complete with its most sensitive systems, including devices for detecting clandestine nuclear tests. Tehran subsequently claimed it had succeeded in replicating the Sentinel and installing its secret systems in the Saegheh. US intelligence was especially put out at the time when Tehran boasted that to capture the drone, it had taken control of the US spy satellite’s communications systems. This was always denied by US intelligence officials. They discounted Iran’s cyber capabilities for this feat. And indeed, DEBKA revealed soon after that a large group of Chinese cyber experts invited to Iran had directed the operation for netting the American drone intact.

Although the Russians were also eager to inspect the American wonder drone, they were kept waiting by the Iranians for years for a look at all its components.

We know today that the Iranians did indeed get hold of the RQ-170 and thus gained possession of one of the most sophisticated operational stealth drones ever manufactured. And, at long last, its arrival at the Syrian T-4 base offered the US Air Force and the CIA their first chance to find out how many of the pirated Sentinel’s secrets Iran had cracked – and shared with Russia and China; which parts of its technology their reverse engineering experts had managed to incorporate in the Iranian product and which they had had not.

Therefore, DEBKA Weekly’s intelligence sources report that on Saturday, Feb. 10, US intelligence seized the chance to turn the tables on Tehran and its Chinese cyber advisers for capture of the RQ-170. Their cyber trap lured the Iranian UAV as far as the River Jordan and into Israeli air space, where Israeli assault helicopters were ready to pounce. This account is further corroborated by the chain of military events involving the US, Russia, Israel, Iran and Syria, which came next and are analyzed in the next article.