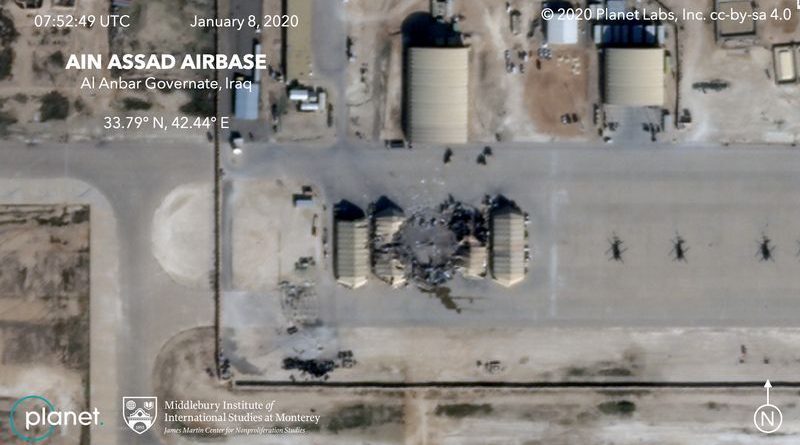 The breakthrough achieved by Iran in upgrading the precision of its ballistic missiles was displayed in its Jan. 8 attack on the big US Ain Al-Asad airbase in W. Iraq. US President Donald Trump laid stress on the absence of casualties and “minimal damage” caused, adding “our early warning system worked very well.” Then, on Jan. 9, the Iranian Revolutionary Guards Aerospace chief Brig. Gen. Amir Ali Hajizadeh said: “Our goal was to destroy the central command room of the base and that is what we did.”

But meanwhile, the US commercial Planet company stepped in with revealing satellite photos of the attack and its impact, showing that at least five structures at the Ain al-Asad airbase in western Iraq – hangars and buildings – were “hit hard by a barrage of Iranian missiles.” They were precise enough to strike some individual buildings “dead center,” said one analyst.

DEBKAfile’s military sources affirm that Iran fired in all 13 Qiam-1 ballistic missiles, designated as “short range.” They are elderly weapons developed by Iran from the Shahab-2 that was a copy of the North Korean North Korean Hwasong-6, which in turn replicated the Soviet-era Scud-C missile. The Qiam 1 has a range of 750km and 500m accuracy.

The president was not asked about the failure of the most advanced US anti-missile systems to intercept the Iranian missiles at Ain Al-Asad. (The second US base targeted by Iran at Irbil in Kurdistan was evacuated some days earlier.)  This could be down to three alternative breakdowns: either the early warning systems did not detect the missiles’ launch from Iran; or the interceptors did not react when the missiles exploded inside the base; or both.

Clearly, in the five months since its missile/drone attack on Saudi oil facilities on Sept. 14, Iran has made further strides in developing the precision of its missiles, whereas the US early warning systems were not correspondingly upgraded.

Iran therefore brought off the first missile attack on US military targets since the Korean War.

The implications for America’s military deterrence are plain, but no less grave are the implications for Israel. The Iranian general stressed that the missile attack on American bases in neighboring Iraq was “only the start of a series of attacks that will take place across the entire region.”
Israel has no illusions about its standing with America on the front line against Iran. And if the US military is short of answers for defense against Iran’s ballistic missiles, Israel whose early warning and anti-missile systems are based on American models is in the same boat.
The Iranian strike on US bases in Iraq on Jan. 8 must serve as an immediate red alert for Israel on what to expect. Instead of telling the Israeli public fairy stories about their country’s non-involvement in the spiraling armed contest between the US and Iran, it would be better for the government to tell the people frankly that Israel is more exposed than ever to Iranian missile aggression.