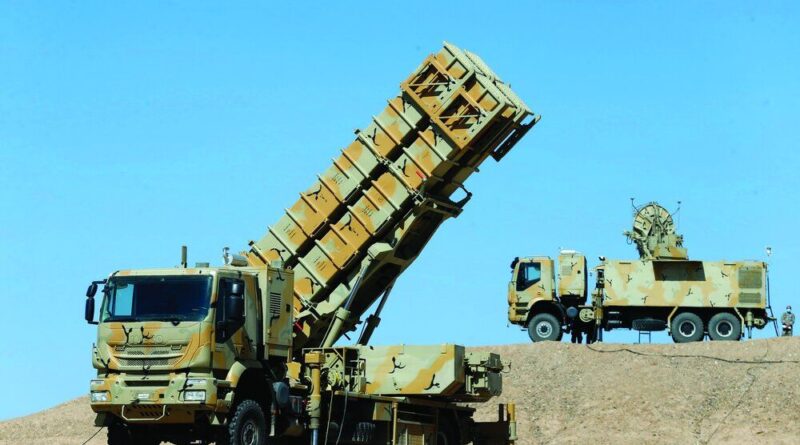 As the answer to “Israel’s threats,” Iran has developed air defense systems “commensurate with any threats,” said Brig. Gen Alireza Sabahifard at the opening on Oct. 13 of “Defenders of the Sky Velayat,” the largest air defense exercise Iran has ever conducted. The general stressed that the systems taking part were produced from top to bottom by Iran’s military industry and capable of “accurately meeting any threat.”

Among them are the Khordad air defense batteries (see photo) for downing aircraft, drones, ballistic and cruise missiles. Other air defense systems undergoing their first trials were the Joshan and Khatam, which are claimed to be effective against low-flying targets. Also taking part are 6 varieties of homemade air defense systems, dubbed Ersad-16, Dezfoul, Majeed, Khordad-15, Khordad-3 and Tabas.
In addition, the Revolutionary Guards Air Force has sent the radar range of its Quds Pulse array to take part in the exercise, claiming it is able to detect hostile targets from a distance of 500km and an altitude of 90,000ft.
“There is no threat that we have not thought of a way to deal with,” Gen. Sabahifard boasted.

DEBKAfile’s military sources report that the message conveyed by this exceptionally wide-ranging drill is intended to reach three addresses:

The eruption of heavy gunfire in Beirut this week, killing six people and injuring 32, was ascribed by Israeli and other media to a protest by the Shiite Hizballah and Amal parties against the judge investigating last year’s huge blast at the city’s port. They accuse the judge of bias against them. The capital has never recovered from that disaster which killed 219 people and devastated the city.
DEBKAfile sources report that this week’s outbreak of bloody violence in protest of the charges leveled against Hizballah was directed just as much against the Noland visit, as a warning to Washington to keep its hands off Tehran’s self-assigned turf.